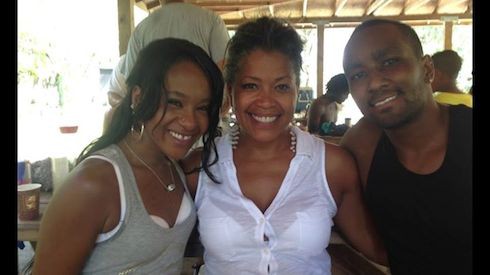 Bobbi Kristina’s family has begun gathering by her bedside at a hospice facility in Atlanta. The comatose 22-year-old was moved into hospice care on Wednesday, as Pat Houston issued a terse statement regarding her niece’s condition:

Despite the great medical care at numerous facilities, [Bobbi Kristina’s] condition has continued to deteriorate. As of today, she has been moved into hospice care. We thank everyone for their support and prayers. She is in God’s hands now.

Both Pat Houston and Bobbi Kristina’s father Bobby Brown rushed back to Atlanta to be with Bobbi Kristina. Neither one was in town when Houston gave the statement to the press; they arrived on Thursday, “looking somber” as they entered the hospice facility along with other members of the extended family.

The family is still holding out hope, and will do so as long as Bobbi Kristina lives: “She is still alive and her heart is beating so there’s hope,” a source told People. “God can perform a miracle.”

At the same time, the family continues to pursue options for legal recourse against Nick Gordon, who has been formally charged with domestic abuse in civil court. Gordon was Bobbi Kristina’s boyfriend, both openly and secretly, for several years; according to the Brown family lawsuit, Gordon pretended to be Bobbi Kristina’s husband in order to manipulate her and gain control over her finances.

Fulton County District Attorney Paul L. Howard Jr., who is in charge of the Bobbi Kristina investigation since the Roswell GA Police Department completed its own, said that, because of Bobbi Kristina’s dire medical condition, his office had renewed its interest in her case:

The Roswell Police Department has forwarded its investigative file to our office. In view of the new circumstances regarding the health status of Bobbi Kristina Brown, we will be reviewing the case with greater interest.

Gordon, meanwhile, has since protected his Twitter account. According to a friend, he is “heartbroken and grieving,” and hopes to see Bobbi Kristina “one final time.” And an unverified tweet on his feed now reads “We keep praying, she has fought hard this long don’t give up hope.”