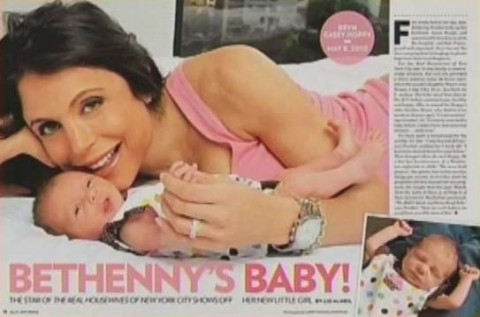 Bethenny Frankel released the first photos of her newborn baby girl Bryn Hoppy to People. Baby Bryn was born 12 days ago, May 8, a month ahead of schedule: a tiny preemie at 4lb, 12oz, but still healthy.

Baby B doesn’t play, she must’ve been listening to all the show-producing going on in her mommy’s world and wanted a piece of that action.

Bethenny was pregnant with Bryn during most of the taping of the tumultuous Season 3 of Real Housewives of New York, and then went straight into filming the last leg of her pregnancy and marriage to Bryn’s daddy Jason Hoppy for the new Bravo series Bethenny’s Getting Married? premiering June 16 (10 p.m. EST).

The Skinny Girl reality star already has a plan to lose the (what? two pounds?) baby weight she gained while pregnant. She kept fit with yoga and walking during pregnancy, but doesn’t want to leave the house much now that she’s a mom so she bought an elliptical machine to get back in shape.

Bethenny Frankel confirms return to Real Housewives of New York City — see who else will join her!