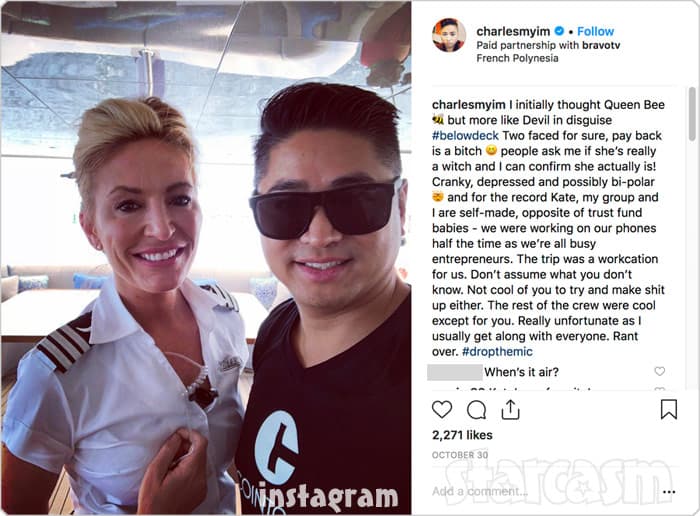 On the most recent episodes of Below Deck, viewers have seen primary Charles Michael Yim and his pals seemingly missing out on the amazing world around them as they obsess over capturing every second perfectly for Instagram. (Actually, Charles and his girlfriend weren’t sharing EVERYTHING on Instagram, as evidenced by their alleged crow’s nest sex session and the used condom left on his nightstand.) After his first episode aired, Charles took to his much-beloved Instagram to call out Bravo producers for their heavy-handed editing, and to throw Kate Chastain under the boat!

“I initially thought Queen Bee ? but more like Devil in disguise,” Charles captioned a photo of himself with Kate (above), adding the #belowdeck hash tag. He continues to attack Kate before defending himself:

Two faced for sure, pay back is a b*tch ? people ask me if she’s really a witch and I can confirm she actually is! Cranky, depressed and possibly bi-polar ? and for the record Kate, my group and I are self-made, opposite of trust fund babies – we were working on our phones half the time as we’re all busy entrepreneurs. The trip was a workcation for us. Don’t assume what you don’t know. Not cool of you to try and make sh*t up either. The rest of the crew were cool except for you. Really unfortunate as I usually get along with everyone. Rant over. #dropthemic

Judging from Charles’ comments, he is reacting as much to the after show clip with Kate, Josiah and Adrian as the episodes themselves.

Perhaps because of the clip above, Charles also singles out second stew Josiah Carter. “We got along just fine with Captain Lee, Ashton, Chandler, Rhylee, Ross, etc.,” Charles reflects in the comments section. “Kate and Josiah are the two main two faced individuals on the yacht… treated them nicely and tipped them well — zero drama but they felt they needed to create some in order to get more air time???”

More from Charles on various topics brought up by commenters:

COMMENT: you did leave a used condom on the nightstand…. ??

CHARLES: no I didn’t actually. Carolyn was playing a prank on Ashton and led him into the room. Look at the footage, it was drenched in water. It’s reality tv, they can spin things anyway they want. 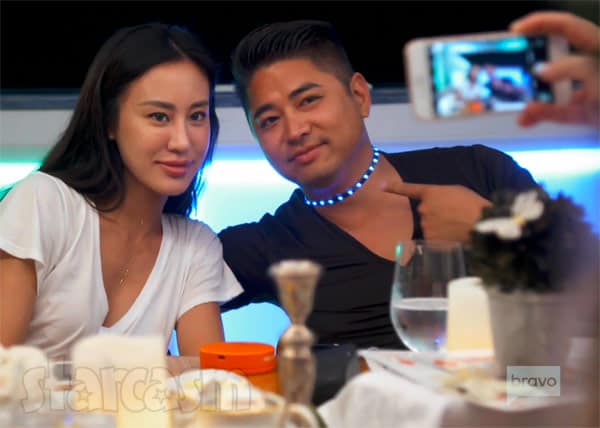 COMMENT: couldn’t you sue for defamation of character? ? because from what you’re saying, they painted you completely in the wrong light… which I’m sure isn’t entirely the case

CHARLES: we signed a waiver unfortunately to be on the show which essentially gives up our rights. Painting us as social media obsessed isn’t the end of the world. I don’t like how they tried to pin the condom thing on me or pretend we were having sex on the crow’s nest when the footage if you look carefully me and my fiancé were merely spooning and cuddling. Hence, they call it “reality/alternative” television ? lol

CHARLES: the condom, the sex scene, making it seem we were on our phones all the time…if you look closely at the footage, my fiancé and I were merely cuddling in the Crow’s nest, as for the condom Carolyn happened to have “found it” and water ? was gushed all over it before to showed it to Ashton. This might be too much info but my fiancé and I don’t use condoms. So where did it come from? As for social media, sure we took pics and videos. Not sure what’s wrong with that.

COMMENT: Someone’s trying to extend his 15 minutes ? yet Kate is seen and adored by 2.5 million viewers each week. #justsayin

CHARLES: not really dude. I’m on shark tank which has 10 million viewers buddy. I’m just making sure the facts are known.

If you’re curious about Charles’ appearance on Shark Tank, he made a bit of history as his Breathometer device, which claimed to turn your smart phone into a breathalyzer, inspired all five investors to go in together to purchase a collective 30% of Michael’s business for $1 million — the first time all five sharks bit on the same pitch. Unfortunately, the Federal Trade Commission later determined that the device didn’t really deliver on its promise, and Michael’s company agreed to offer a full refund to anyone who purchased it.

The FTC says that it discovered serious accuracy problems with the breathalyzer device. Because it was advertised as a law enforcement-grade device and because consumers were encouraged to use it to determine whether or not they were safe to drive, the Commission took accuracy problems pretty seriously.

“People relied on the defendant’s products to decide whether it was safe to get behind the wheel,” Jessica Rich, director of the FTC’s Bureau of Consumer Protection, said in a statement. “Overstating the accuracy of the devices was deceptive — and dangerous.”

Seven hours prior to Michael’s post, Kate shared a brief video of him taking a selfie and saying “This is the next level of Darwin’s natural selection.”

Can’t decide if posting this on social media is meta or hypocritical or both. Either way I’m pretty sure Darwin wouldn’t have spent much time on Snapchat. New #BelowDeck tonight at 9 on @bravotv

Kate has yet to respond after Michael’s criticism, but Below Deck chef Adrian Martin got all up in Michael’s comments:

CHARLES: uh what about the entire menu buddy… that was a part of my request as well. Not sure what your issue is, as we were polite guests the entire time and to you specifically. Applauded you for your work and talent as well as tipped accordingly. For the record, the curve ball comment was merely a joke. If I really wanted to be demanding I could have.

As far as Kate’s silence, I would have to assume it is because she is taking time to think over exactly what font to call Mr. Yim. I know I cannot wait to hear what she comes up with! (I’m thinking Tekton Pro Bold or maybe Wingdings?)