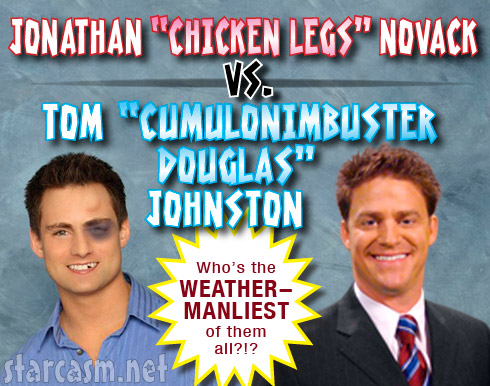 One of the 25 guys competing for the heart of Ali Fedotowsky in season 6 of The Bachelorette is 30-year-old Jonathan Novack, a weatherman and on-air personality currently living and working in Houston, Texas. 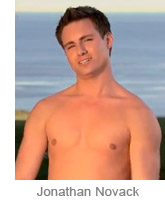 Originally from Boston, Jonathan’s career has moved him all over the country including stints with WAER in Syracuse, KCBD-TV in Lubbock and WSVN in Miami, Florida. I’m sure Jonathan did his fair share of tropical storm coverage while in Miami, but his extensive meteorological education didn’t help when Hurricane Tom rolled into town! Check out this email sent to the National Weather Service office in July of 2005:

WSVN Miami 7 News Meteorologist Tom Johnston was fired late yesterday following a physical fight with fellow weatherman Jonathan Novack in the weather office, according to some very close sources. Apparently the two went at it over vacation days and Tom grabbed Jonathan by the neck. Tom was fired, his bio removed from the website last night. Jonathan is the new weekend weathercaster. He was not seriously hurt.

Miami insiders tell FTVLive about a fight that broke out in the weather department. Word is that Weekend Nighttime weather guy Tom Johnston was fired from WSVN yesterday after getting into a fight with the weekend morning weather guy, Jonathan Novak It happened on Saturday afternoon around 4 or 5pm… details are still sketchy as to what went down., but one source says that Johnston wiped the floor with Novak over what they hear could have been some sort of scheduling conflict. Others say Novak simply got tired of Johnston hassling him and treating him like a child and confronted him in the weather office. Sources say that fists started to fly sometime after 4pm on Sunday. One source says that Novak comes running into the newsroom screaming something like “Look what he did, he just attacked me”… or something like that. The Executive Producer intervenes and one of the producers starts taking pictures of Novak’s ripped shirt with their cellphone. Johnston was booted and taken off the station’s website and all promos with him in them have been pulled.

Sounds like ol’ Jonathan “Chicken Legs” Novack (his own nickname for himself – watch the video HERE) got the hail kicked out of him! Partly pouty with a chance of punches raining down!

Jonathan didn’t get the weekend weathercaster job vacated by Johnston, but has since moved on and is currently a very successful weathergirl in Houston, Texas.

I looked into Tom Johnston and found this “highlight” reel on YouTube:

The last station I could find associated with Johnston is WFTX Fox 4 in Fort Myers. His Facebook and Twitter accounts say he is back in Miami, but he doesn’t appear to be doing television weather any longer. Perhaps he has moved on to his true calling of being an ultimate fighter!

PHOTOS and BIOS of all 25 Bachelorette Season 6 contestants