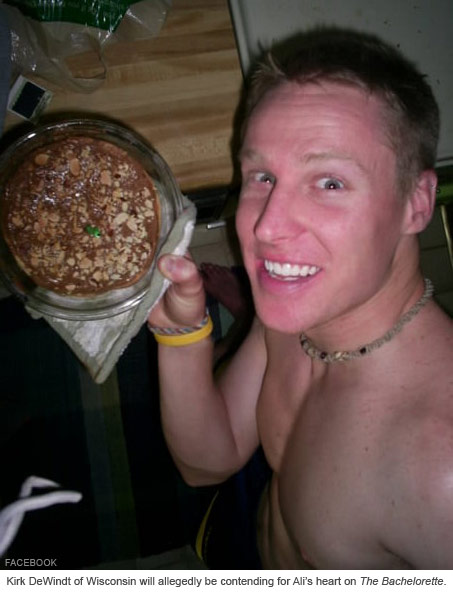 The Bachelor‘s lovable loser Ali Fedotowsky returns to ABC Monday, May 24 as The Bachelorette with a brand new cast of 25 handsome young men looking for love.

As we all know, half the fun of watching The Bachelor and The Bachelorette is being impatient and trying to figure who is going to be on the show before it airs! So, we here at Starcasm are introducing “The Bachelorette Files” in which we will reveal to you what we and other internet sleuths have been able to uncover about the contestants and the show itself so you will already know a little bit when that first episode airs! 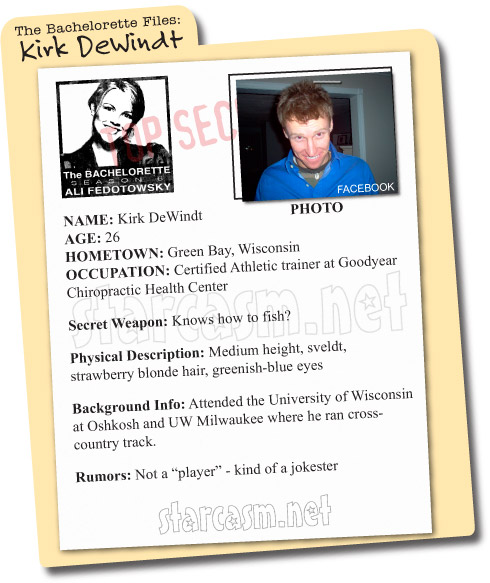 First up in the the Bachelorette Files is Kirk DeWindt from Green Bay, Wisconsin. Kirk is a cross-country runner who went to Green Bay Southwest High School from 1997-2001. He attended and ran cross-country for the University of Wisconsin Oshkosh and then UW Milwaukee.

In addition to being a cross-country track star, Kirk is also a competitive fisherman!

Kirk DeWindt has a very attractive sister named Talon DeWindt who currently resides in Minneapolis according to her Facebook account.

Here are some comments posted by someone claiming to be a close friend of Kirk’s in reference to his being on the show:

“kirk dewindt is my friend, and as a psychologist, i know him, and he’s like my twin, he’s a great guy, super genuine, super sexy and hot, and has an amazing sense of humor, we have tons of fun when he visits colo, so when i looked at ali’s profile, i was like wow, she is so compatible with you,l so have her take a second look at this guy, i love him like a bro, bc i know that he’s legit, and not some player, he’s from the midwest, and these guys are the best, ha ha, i guess i’m biases”

“He’s my holistic friend for a reason, and he is respectful of women. if he is compatible with ali, then I want him to marry her…. he is totally ready to get married! he’s such a great guy that is genuine… and is like myself… that is why i endorse him, bc he’s genuine. i like good guys, that are still masculine, but want to settle down.”

Other installments of “The Bachelorette Files”

CLICK HERE for photos and very brief bios of all the contestants!