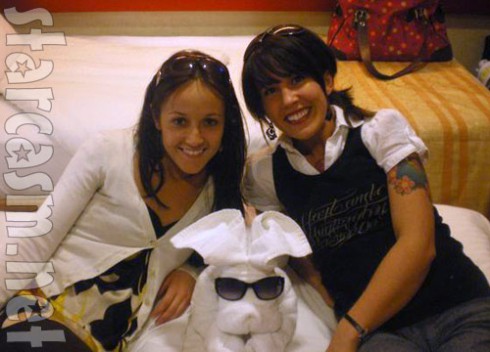 It looks like reality television runs in the Hebert family. Bachelorette Ashley Hebert‘s sister Chrystie Hebert Corns will be featured on an upcoming TLC reality series about couponing, Extreme Couponing. That’s right, this is EXTREME, not your run-of-the-mill everyday lazy couponer who has a stash of expired coupons in an overstuffed drawer.

Chrystie, who will be featured on a May episode of this new reality series, began couponing when she started her own social marketing consulting firm as a way to help her provide for herself and her child as a single mom while she built a business. But soon, what began as a survival strategy became more of a fun game. She now gets a thrill from walking out of a store with hundreds of dollars worth of stuff for only a few dollars, even if she doesn’t use the stuff herself. But this doesn’t mean that she’s quickly qualifying herself to appear an yet another reality show, Hoarders, the things that she has no use or need for (like contact lens solution or men’s deodorant) she gives to others in gift-baskets or sells to her ex-husband.

Even her kids, Sebastian,6, and Taylor, 4, have caught the couponing bug. Instead of asking their mom if she’ll buy them something, they ask if she has a coupon for it.

Sometimes Chrystie doesn’t just save money, she even comes out ahead sometimes. She describes her best day to Bangor Daily News:

The Madawaska native even set up a blog to share her cheap coupon finds with others, ilovetogossip.com.

Couponing can be a major jackpot if you play your cards right, but sometimes it can be time consuming, one of the ladies in the trailer below admits that she can spend four to six hours preparing for a shopping trip (and that doesn’t even count the time spent driving from store to store to snap the best deal.) The old cliche is true, there ain’t no cheap lunch in this world (but there are plenty of cheap ones!)

Chyrstie’s sister Ashley is currently in the throes of filming the seventh season of The Bacholertte, and we will see both siblings on our television sets in May when The Bacehelorette Season 7 premieres and Chrystie’s episode of Extreme Couponing airs.