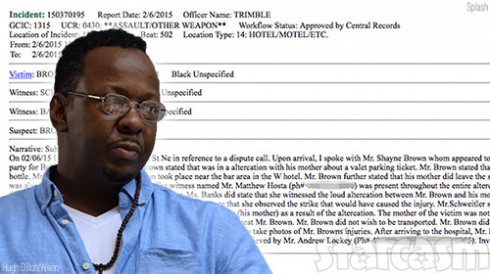 It sounds like the Brown family broke under stress during what was supposed to be an enjoyable birthday celebration for Bobby Brown last night.

According to a police report (partially shown above), Bobby’s nephew Shayne Brown got into a fight with his mom, Tina, about a valet ticket when they were leaving the birthday celebration at the W Hotel. The report continued, “Mr. Brown stated that while arguing with his mother, she spit in his face and hit him in the head with a glass bottle.” Witnesses claimed they say Shayne swinging back at his mom.

Based on the 911 call someone made, a total of “eight to 10 people” were involved.

Although Shyane told officers he didn’t want to press charges, he drove himself to the hospital to get stitches for a laceration on his head. He also suggested that either his mother or someone else intentionally scratched his car. According to TMZ, two other people were injured and there was “blood everywhere.”

By Friday morning, many members of the Brown family were pictured arriving back at Emory University Hospital to be with Bobbi Kristina. They were joined by Whitney Houston’s mother, Cissy Houston, who was finally able to fly to Atlanta.