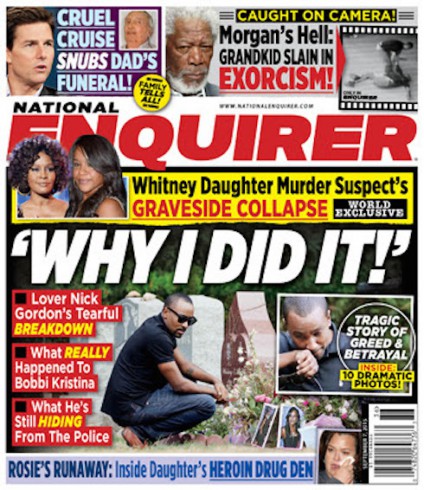 Photos of Nick Gordon’s secret pilgrimage to Bobbi Kristina’s final resting place have been made public–along with a startling new report regarding a possible confession by Gordon, who remains the sole suspect in the ongoing Bobbi Kristina criminal investigation.

A new National Enquirer report features photos from Gordon’s graveside visit, which visit had been rumored in the media for days without supporting evidence. According to many reports, Nick Gordon was banned from both Bobbi Kristina’s funeral service in Atlanta and her New Jersey burial service two days later. In addition, Gordon was barred from visiting Bobbi Kristina at the Peachtree Christian Hospice in Atlanta, and was not allowed to see her in the hospital before that.

It’s alleged, then, that Gordon kept his graveside visit a secret in order to keep Brown and Houston family security away. At least one photographer was able to capture the August 17th visit, during which Gordon brought flowers, became “completely overcome with grief,” and broke down and wept.

However, perhaps the most startling new information to come from the Enquirer report is the allegation that Nick Gordon confessed his crimes to a close friend upon returning to his Florida home. Though the report doesn’t state exactly what Gordon confessed to, a different, but similarly close friend said that Gordon “knew he had to make the journey to the grave to say goodbye–particularly after he was banned for six months from visiting her in the hospital or paying his final respects to her in the hospice.”

The visit, the friend said, was crucial for closure on Gordon’s part: “Nick went there to face his demons. He needed closure.”

To date, there are no criminal charges pending against Nick Gordon in the matter of Bobbi Kristina’s death. The $10 million lawsuit the Brown and Houston families filed against him is a civil matter, and one that has not yet been assigned a trial or trial date.