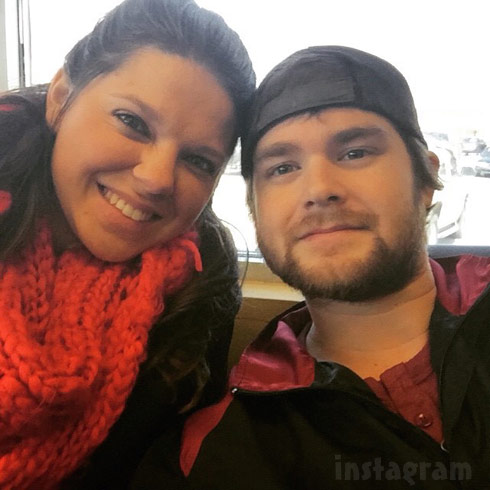 It’s been less than a week since the online publication of a 2006 police report detailing Josh Duggar’s alleged sexual molestation of five young girls, four of whom were reportedly his sisters. Since the release of the report there has been some speculation that Josh’s cousin Amy Duggar may have been the fifth girl involved. On Friday, Amy’s boyfriend Dillon King responded to the speculation with a definitive answer.

Dillon shared a photo of Amy on Instagram and wrote, “I’m so thankful for this beautiful girl in my life, praying for the Duggar family in this hard time…” He added, “Thank you Jesus Amy wasn’t involved in the situation. Love you baby girl! Praying for your family and the love ones involved.”

Amy responded by writing, “Thank you baby, you’re amazing and I’m completely in love with you. Thank you everyone for all the prayers.”

In addition to Amy’s response, as well as numerous debates about the relevancy and justifiable fallout stemming from the police report, Dillon’s comment had many questioning if what he wrote was appropriate given the situation. Asked one commenter, “‘It’s an awful thing, but at least it didn’t happen to MY girlfriend.’ Really?” Said another, “Thank you Jesus Amy wasn’t involved? Not thanking Jesus for 4 of her cousins being involved? That’s a bit cold.”

How is praying for the Duggar family and the victims at this time as they are all dealing with things, and being glad the my girlfriend wasn’t involved wrong? I’m not trying to take away anything from the victims, or act so selfish in this hard time… There are things that I’m not allowed to express my opinions on. And I’m not 100% sure as to what all happened… I find out about this stuff the same way you all do. I’m the kind of person that likes to have FACTS, not “media stories” before sharing and throwing my opinions around (I haven’t had the time to read the police reports) . You guys and gals can talk and voice your opinions, you have the right to do that… But please don’t think I’m only thinking of myself and Amy in this situation (that’s not the case) my prayers goes out to the Duggar family, the PPL involved, and the families involved.

One commenter responded to Dillon’s statement with:

I understand you are trying to show your support to your girlfriend who you adore and want to protect & good for you! My husband would be the same way. But can you see that some people might find it a bit insensitive that your saying you thank Jesus she wasn’t molested when 4 of her cousins where?

Personally, I have no problem with what Dillon said, but I do think he could have said it more tactfully.

On a side note, I was amazed at how many of Amy Duggar’s boyfriend’s followers had no idea about the Josh Duggar story.

Duggar Digest: Jana Duggar is hidden in new episodes, the family goes on a college trip and Jill talks about baby fears