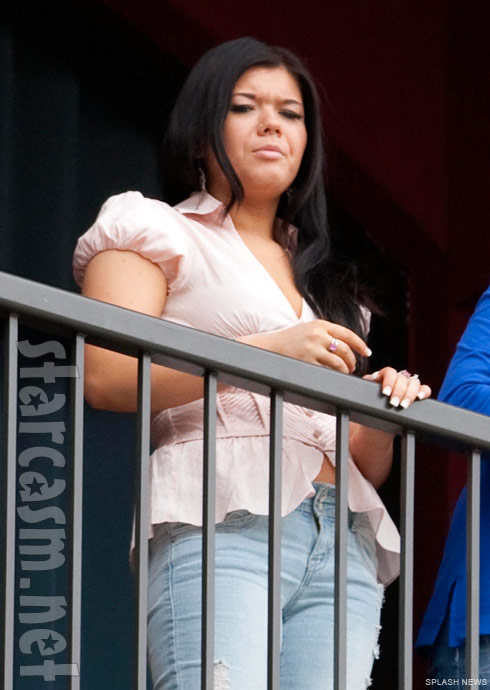 Way back in January of 2011 we reported on Teen Mom vet Amber Portwood having allegedly been offered $500,000 by Vivid CEO Steve Hirsch to film a p0rn. At the time, even while Amber was down spiraling towards her decision to opt for jail, the idea seemed pretty far-fetched.

Now, in the light of the Farrah Superstar: Backdoor Teen Mom insanity that has resulted from Amber’s alum, Farrah Abraham, doing just that with the same company it doesn’t seem so off the charts that Portwood very well may have received an offer. You could argue about the amount of cash on the table, but at the time Hirsch kept things pretty close to the vest about the possibility which only fanned the flames of the rumor. “We can’t comment on any discussions that we may or may not be having with Amber,” he said.

Now Amber’s greatest defender since she has entered jail, her brother Shawn Portwood, has taken to Twitter and Facebook to condemn Farrah’s actions and not so subtly hint that even in a crisis, his sister had the self-respect and strength to not go the p0rn route. Shawn tweeted:

As Ashley’s Reality Round Up reported, Shawn posted to his Facebook page a post that basically contained the same message. He wrote:

I remember at the time being shocked that Amber had made the conscious decision to go to jail but in hindsight and from the progress she’s apparently made – in the end she very well may have saved her own life and in the process kept herself out of forever being linked to an adult film.

To each their own many argue, but TMZ has already posted up some barely scensored images from Farrah’s romp. Soon, the internet will be inundated with a barrage of indelible images of Abraham that will be with her forever. If to each their own is your vantage, I might argue that Amber’s decision to submit herself to jail knowing she was lost might very well end up being the wiser choice than Farrah’s to film a p0rn.