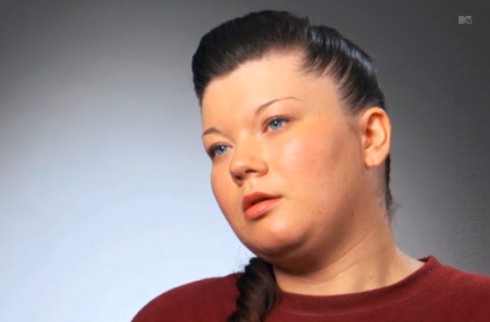 In Dr. Drew’s follow-up special to the end of Teen Mom “Amber Behind Bars” we got to see Amber Portwood completely sober for the first time, in possibly forever. Amber has previously said that she’s been hooked on prescription pills since she was 13, and she tells Dr. Drew how scary her nightmare addiction actually got.

Amber shocked everyone, including her lawyer, this May when she chose prison over getting drug treatment. It turns out that this may have been the most important decision of her life, because it probably saved her life.

About two months into her prison sentence, Amber was transferred to a “therapeutic community” within the prison, which Amber describes as “kind of like a rehab in prison.”

She said when she was in treatment on the outside, that she didn’t seem to be getting anything out of it because she was still doing drugs. In fact, she moved to a harder version of pain pills, Fentanyl patches, which are skin patches that deliver a constant stream of synthetic- opiates for people requiring long-term pain relief (like cancer patients.) Amber used them, as many opiate-addicts do, by chewing on them, which releasing a high, potentially fatal, dose of the drug.

When Dr. Drew asked if she understood that she was constantly putting herself in danger of a fatal overdose, Amber replied:

“I kinda did, I just didn’t care. It all comes down to I didn’t care. I would go in the mornings to go pee, to screen [for court-ordered drug testing,] I would be chewing on a patch as I was screening. That’s when I knew that I just did not give a f**k. And I just could not live like that at the age of 22 and not givin’ a s**t. Something just clicked in my mind when I woke up, and was rushing to go that date of court, and I felt sick, and I was dizzy . . . I just felt ‘What is going on right now? What did I do to myself?” I had just never felt like that before. Like I was done.

She went on to say that she was so far into her addiction, that at that point nothing mattered to her, not even Leah. “It’s not that you don’t love your child, you’re a very selfish person when you’re an addict. All I wanted was to find drugs so I didn’t have withdrawal. And I didn’t care about who was in my way, and you just always think about ‘How am I gonna get my next pills?'”

Click here to watch a clip from tonight’s show.

REPORT Ryan Edwards to file for divorce, not living with Mackenzie