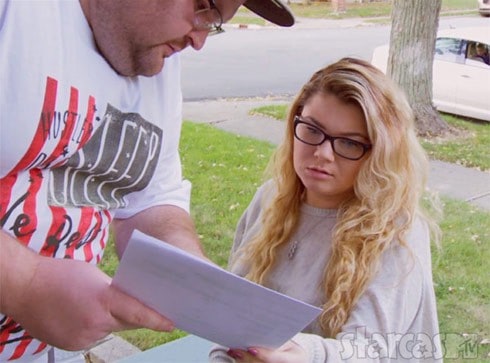 According to official online court records via the State of Indiana, Teen Mom OG stars Amber Portwood and Gary Shirley have reached a settlement agreement in regards to custody of their daughter Leah.

The lengthy court battle over Leah’s custody and child support has been featured prominently on the popular MTV show.

During a Facebook Q&A in February, Shirley answered a question about some of the particulars of how the custody situation worked. “I don’t keep Leah from her — it’s played out worse than it is,” he said. “It’s not me. Amber can see her anytime, she just needs to make sure we have no important plans.”

Gary added, “But the only reason I have issue with her getting her overnight thru the week is Leah has perfect attendance and all A’s. And Amber lives 50 plus min from school we both don’t wanna jeopardize that.”

On May 13, there was an order granting the following:

UPDATE: Amber and Gary have both tweeted about their agreement since the news broke.

Portwood took umbrage with how the story was reported by TMZ and Perez Hilton:

Ok..I’m the one who told Gary I would pay him money and I also said he could have primary because he’s closer to her school.

@TMZ @PerezHilton why don’t you do your job instead of just writing whatever..all of this was my decision. The money and everything

@TMZ @PerezHilton we’ve never went to court.I settled it myself! Gary and I agreed like adults! I told him I would pay him!! He never asked!

Gary made sure to let everyone know that Amber was telling the truth:

Amber gave $ 2 help cover Leahs needs. We agreed she stay w me primarily due 2 her routine & I live closer 2 her school. @AmberLPortwood

This news comes after it was revealed earlier this month that Portwood was levied a federal tax lien for failing to pay more that $130,000 in taxes.

PHOTOS Meet the contestants (and the winner!) of the “Win a Date With Gary Shirley” contest!