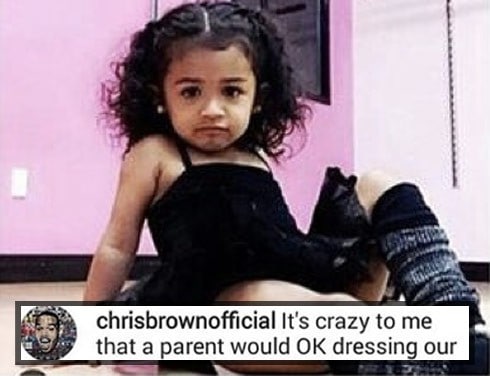 Chris Brown has publicly criticized Nia Guzman, the mother of his 2-year-old daughter Royalty, for an outfit she dressed the child in that he deemed inappropriate.

Brown posted, and later deleted, a photo of Royalty decked out in dance attire and captioned the image, “It’s crazy to me that a parent would OK dressing our daughter like she 16. I ain’t cool wit that. SHE IS 2!!!”

Guzman fired back publicly writing, “If anybody thinks something is wrong with a baby … mad at the world in dance class… in her TUTU… U need to go pray! #Namaste.”

Brown then replied to her reply. “I ain’t here to argue back and forth with anyone. Dance class is fine even with the leotard. The pics just looks risky in my opinion, this isn’t a debate. She’s 2. I ain’t talking about it on social media any longer. I said my opinion,” he wrote.

So, Brown publicly shared a pic of his daughter that he found to be inappropriate in order to publicly criticize her mom? Then he deleted it after saying that he wasn’t going to argue about the situation on social media?