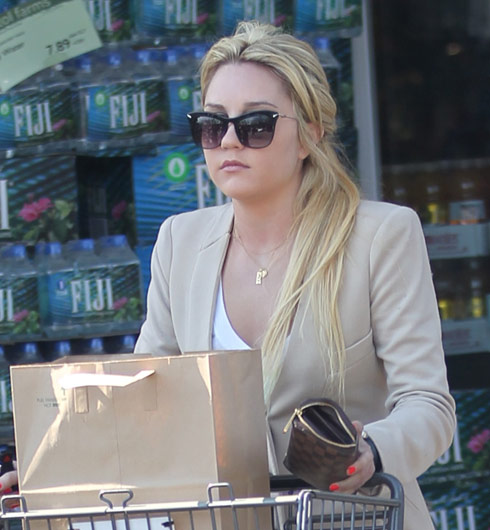 Amanda Bynes recently moved to New York City after several questionable incidents involving her vehicle and some extremely odd behavior. Since her move last month, she’s stayed out of the spotlight, for the most part, but now Amanda is back and she’s still exhibiting odd behavior. During a visit to Beach Bum Tanning Salon, the retired actress shocked everyone (but not really) when she made an appearance in the lobby area wearing nothing but her birthday suit.

After purchasing a Mystic spray-tan session, Amanda was set up in a private room by one of the employees, but moments later, she came right back out to the lobby to get a pair of goggles — and she was totally nude. “She walked out of the room completely naked,” an eyewitness tells In Touch Weekly. “She didn’t seem to care that everyone saw her naked. She seemed totally out of it.”

“She took her time walking back to the Mystic room, dragging her fingers along the wall and smiling at customers who passed her,” the eyewitness adds. “There was definitely something wrong with her.”

In the last few months, Amanda has seemed to be on a downward spiral. After three hit and runs and a DUI, she was seen driving without a license while smoking out of a drug pipe. Inside her vehicle was a disgusting mess covered in what looked to be remnants of marijuana. Shortly after that, her car was impounded and she was once again instructed to stay away from the wheel.

Amanda then moved to New York City where she is allegedly pursing a career in fashion design.

We can’t help but wonder, why has no one given Amanda a reality show yet? Hasn’t anyone ever heard that America loves a good trainwreck? We can see it now.. It would be called Here Comes Honey Cuckoo! and Amanda’s catch phrase could be, “You better trainwreckognize!”

That being said, we hope Amanda will soon get the help she needs to regain her sanity.

UPDATE: Amanda has released a statement regarding this story to Us Weekly. She says, “I’m suing In Touch for printing a fake story. I’m not ‘troubled.’ I don’t get naked in public. I’m 26, a multi-millionaire, retired. Please respect my privacy.”