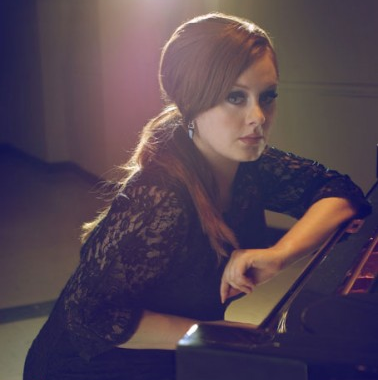 Adele is set to sweep the Grammy Awards tonight with her soulful songs about heartbreak. She based both of her heart-rattling albums 19 and ” target=”_blank”>21 on relationships gone wrong, but it turns out her difficult childhood must have also been a source for her emotionally stirring performances.

Adele recently had surgery on her vocal chords (she’s still got her chops, click here to hear her first (a cappella) performance since her surgery.) She’s got a new love, Simon Konecki, and they seem incredibly happy. After pain and heartbreak, and health struggles it looks like 2012 is shaping up to truly be Adele’s year.

Adele Laurie Blue Adkins was born Tottenham, north London May 5, 1988 to Mark Evans and Penny Adkins, who was only 18 at the time. July, 2011 Mark (a 47-year-old plumber) spoke to the UK’s Mail on Sunday about Adele’s childhood, and his shortcomings as a father. Mark, who struggles with alcoholism, is a Welshman who was still into womanizing and rabble rousing when he got Penny Adkins pregnant. Mark claims he wanted to marry Penny, but that she was against it because they were so young. They split when Adele was only three years old, and he rarely saw much of Adele after that. Mark says she was named “Blue” because he loved the blues, and that he remembers lying “on the sofa all night cradling her and listening to Ella Fitzgerald, Louis Armstrong, Bob Dylan and Nina Simone. I’m certain that is what shaped Adele’s music today.”

Last March, Mark talked to The Sun about the extent of his alcoholism. He says he entered a three-year state of extremely heavy drinking after his own dad died in 1999.

“I was a rotten father at a time when she really needed me. I was putting away two litres of vodka and seven or eight pints of Stella every day. I drank like that for three years. God only knows how I survived it. I was deeply ashamed of what I’d become and I knew the kindest thing I could do for Adele was to make sure she never saw me in that state.”

Even though Mark says he’s since reconciled with his daughter, he says he never goes to her shows, and hardly listens to her music because he feels so guilty. Adele tells a different story about their supposed reconciliation. She told Rolling Stone “I never knew my dad. He has no f**king right to talk about me.”

But Adele has nothing but glowing things to say about her mother Penny: “She’s a great mum. She’s always been supportive. She’s my best friend. I want that connection [with my kids

VIDEO Adele does her best Nicki Minaj for carpool karaoke

PHOTO – Adele tattooed her son’s initial behind her ear