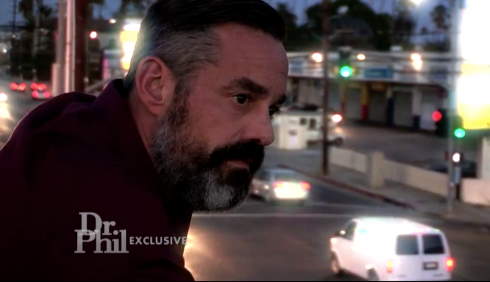 44-year-old actor Nicholas Brendon, best known for his role as Xander Harris on the hit late nineties/early 2000s show Buffy the Vampire Slayer, has been struggling in recent years with depression and alcoholism. His troubles have led to multiple arrests, and a “dual diagnosis,” which is when mental illness and addiction issues are present in an individual at the same time. He decided to open up about his journey with Dr. Phil, but ended up storming off within minutes of coming on stage.

“Dual Diagnosis means that I’m f**king crazy and I’m a f**king drunk,” Nicholas explains in the pre-filmed intro. “Dual diagnosis means that you’re battling depression and are an addict. Depression is a real thing and I was ashamed of it a little bit too.”

He not only drank to cope, but also used sleeping pills. “When I was getting arrested on the road I would drink and I would mix them with those pills and I would wake up in jail,” he says. “That combination was just for me was just very deadly. When you do those two things you just black out.”

Once Brendon gets on stage, Dr. Phil asks him why he’s here, and Brendon explains he wants to shine light on the fact that depression and alcoholism can be linked. Things start to get tense, though, as Nicholas starts to worry about Dr. Phil’s intentions. “I’m not here to kind of have people laugh at my f**king life. People aren’t going to laugh at my life doc,” he then says. “I’m not going to do this. You know? What do you want to talk about? It’s your show.”

Things come to a head, and he walks off stage after Dr. Phil asks him if he showed up the taping drunk.

To fill in the extra time, Dr. Phil taped a segment with a Daily Mail editor, who said they were “investigating” whether or Brendon be back on Criminal Minds, and says their readers are “upset” because he’s such a cult figure.

Dr. Phil goes onto say that the days leading up to Nicholas’ appearance were a “show until itself.” Producers say he was sober in the morning, but drunk and belligerent by the afternoon. There were also two hotel incidents. His girlfriend Amelia called the producers at one point, saying that she and Nicholas had broken up, and he was in a rage.

They moved Amelia to another hotel room, and Brendon was fine the next morning. He opened up about his troubles on camera, but, that night, went out drinking again, and skipped out on a $300 tab. Dr. Phil’s staff found him hiding out at a liquor store. When he got back to the hotel room, he had another huge fight with Amelia. Amelia claims he allegedly put her in a chokehold and threatened her life. The police were called, and Brendon tore off his shirt and ran away on foot.

By the time the LAPD arrived, Amelia and Nicholas were hugging and kissing, and the hotel kicked them out.

During the show, it was revealed that Nicholas walked off the stage because he did not want the show to be an intervention. Dr. Phil argued that Brendon contacted the show’s producers, saying that his life was falling apart, and stating explicitly that he needed help.

After Dr. Phil’s episode aired today Nicholas, tweeted: “Hey all. I love you. Thank you for your support. @DrPhil just sent a depressed person into an Abyss. He really helps people
#Drphilcares?”

Kiss’ Gene Simmons to people with depression: ‘Kill yourself’