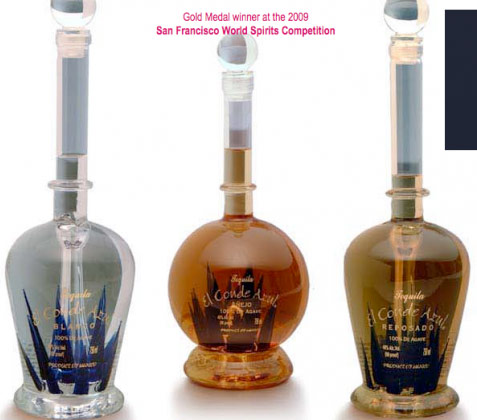 After being fired from his car salesman job, Simon Barney got into the tequila business. He must have made some cash upfront with this venture, because for several years and Tamra were livin’ the high life in O.C. They at least were able to make mortgage and tax payments on their home, and forgot to save up in case something like an economic downturn happened. The downturn did happen, they’re losing their luxurious house, and for some reason Simon has a crappy website and isn’t taking nearly enough advantage of his wife’s infamous Housewive status.

Simon should have invested in a line of tequila with varying price points, because the cheap liquor business has been booming the past few years. Instead, Simon deals some pretty high end stuff that comes in pretty bottles: El Conde Azul. The only problem is that the website is designed poorly, and it’s difficult to find much information about the tequila. The bottles really are appealing, so they got the packaging right. From the few reviews I’ve been able to drum up, it’s actually a mighty fine liquor as well. I bet if they spent a little money jazzing up the website and gearing up a good advertisement campaign, they could get out of their profit slump. Simon’s apparently got a good product, he’s got a great platform (Real Housewives), why sell yourself short?

Simon and his partners sell three different kinds of El Conde Azul, all of which are made from 100% Blue Agave: Blanoco, Anejo, and Reposada. They have a page on the site that describes their tequila-making process in unedited frat-boy Fresman English fashion. On one hand, I’m impressed by the pictures and seemingly complicated process, but on the other hand I’m a little weary of consuming a potentially deadly if not processed right product from someone who’s website shows a complete disregard for attention to detail.

There’s also an illegible page about the history of El Conde Azul, which I’m sure if fascinating if you could actually read it. Although I’m completely perplexed by their lack of judgment in website design and marketing prowess, I am intrigued. A reviewer on tequila.net noted: “There is something about it that intrigues me though and I keep going back for more.” Hmmm. If Simon’s up for sending a bottle, I’d be willing to do a review.

If you’re like me and inexplicably intriqued, you can pick up a bottle for about $60 at winedelight.com.