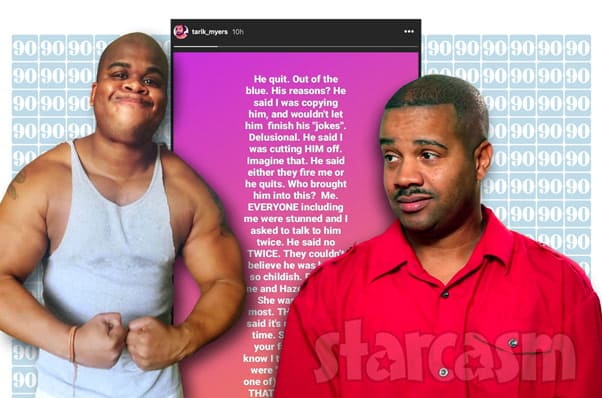 TLC has yet another successful 90 Day Fiance spin-off with their series Pillow Talk, and one of the favorite cast duos offering up commentary were brothers Tarik Myers and Dean Hashim. Despite their popularity, the comedic siblings vanished from the show late last year without an explanation.

There have been lots of rumors about why they left the show, including numerous headlines linking their departure to Dean joking about Before the 90 Days star Tim Malcolm being transgender.

Tarik denied those claims, but wouldn’t go into too much detail about the real reason. “When family lies on you, smiles in ya face but stabs you in the back, fux up the bag, blocks you and your girl without warning but on social media acts like y’all still kool so he won’t lose his IG following….Me and Hazel be just like Jeezy and Jeannie…” Tarik wrote in an Instagram caption on December 18. His string of hash tags included #youaintCainandIaintAbel, #youallouttapocket, #keepthatsameenergyinpublic, #tellemwhatyoudid and #TimhadnothingtodowithitATALL.

Tarik shared a bit more in the comments, including a denial that their absence from Pillow Talk had to do with his continued relationship with co-star Ricky Reyes. He clearly pointed the finger at Dean, but once again didn’t share specifics:

COMMENT: So is it true that you and Dean had a falling out because you chose to stay cool with Ricky even after he call a woman the n-word?

TARIK: Understand. Not a single solitary soul had anything to do with this other than me and the person In referring to. Not Tim, not Ricky, not anyone. Whoever is spreading those rumors has absolutely no idea what they’re talking about. Clout chasing big time. This is about family betraying family. Period.

COMMENT: Just tell us Tariq. We are your followers and asking TLC to bring ya’ll back but if it’s over, and a line as been drawn under it then be straight with us. Keep it 💯

TARIK: I’ve said way more than I would like to already here. And much more than I told the bosses I would. Unfortunately you’ll have to read between the lines. If you look through my posts you’ll see that I stay out of messy sh*t, drama and the rumor mill. I’m probably the only cast member who follows no one other than my girl specifically keeping only to our business. I’ve been silent for months. All I CAN do is cut the grass down some so people can see the snake. Snake me behind the scenes but fake the perception that we’re kool bc it helps you? Nah.

Things were relatively quiet between Tarik and Dean for a couple months, but Dean’s appearance on a recent episode of 90 Day Fiance: Self-Quarantined seemed to re-ignite the sibling rivalry.

In case you missed the news, Dean is currently living in the Philippines with his girlfriend Rigin. Following in his brother’s footsteps, Dean met Rigin through an international dating website. Unlike his brother, Dean wasn’t tied to the United States, and he says that really bothered Tarik. 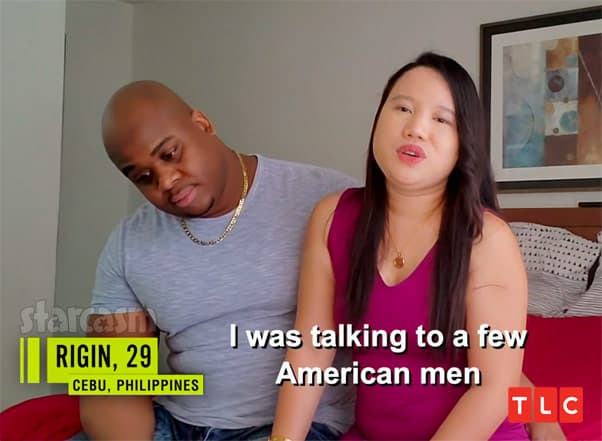 On the Self-Quarantined episode, Dean video chatted with his other brother Sadiq, who asked Dean if he had spoken to ‘Rik.

“I’m gonna be honest with you, man,” Dean replied, “I ain’t talked to ‘Rik in like six months, bro.” Sadiq acted shocked, but I find it hard to believe that he didn’t know his brothers hadn’t been talking for six months — especially given how public their falling out was.

“To keep it 100 with you, he really doesn’t support my life out here,” Dean explained. “He really had a big problem with me actually coming out here.”

In a separate clip of just himself, Dean explained further. “I think Tarik approves of my relationship with Rigin, but he doesn’t approve of the way I went about my relationship. I said, “Screw it! I’m leaving America! I’m coming to the Philippines!” He didn’t like that.”

Speaking of things that Tarik doesn’t like, he apparently did not like Dean’s comments about him on the show! Dean took to Isntagram Sunday night and finally shared specific details about why he and Dean are no longer on Pillow Talk:

He quit. Out of the blue. His reasons? He said I was copying him, and wouldn’t let him finish his ‘jokes”. Delusional. He said I was cutting HIM off. Imagine that. He said either they fire me or he quits.

Who brought him into this? Me. EVERYONE including me were stunned and I asked to talk to him twice. He said no TWICE. They couldn’t believe he was being so childish.

Blocked me and Hazel out [of the] blue. She was hurt the most. THAT’S when I said its middle finger time.

So if we were your favorites just know I tried. His words were “I am THE (not one of) but THE STAR!’ THAT’S WHY I DONT F*K dude. I’m getting this out of the way now be[cause] I’m tired of hearing about it. You heard it from the horse’s mouth now.

I’m not exactly sure how Tarik imagined being able to continue doing Pillow Talk after Dean moved to the Philippines. I’m going to read between the lines a little bit here and speculate that Dean revealed to Tarik his plans to move to (or perhaps his plans to stay after arriving in) the Philippines. Part of the reason that Tarik didn’t like the idea of Dean moving there permanently was because it would mean they wouldn’t be able to do Pillow Talk. That resulted in some smack talk from Dean about how he was the funnier of the two and Tarik was actually holding him back on the show, blah, blah, blah.

That would mean that Dean being asked to return twice, and turning the show down twice, would have had more to do with him wanting to remain in the Philippines than anything else — which makes more sense than giving up screen time (which he seems to love!) because Tarik was stepping on his jokes.

There were rumors that Dean was filming for TLC with Rigin, most likely for 90 Day Fiance: The Other Way. That would certainly explain why he was so motivated to leave the United States, because otherwise he would not be a fit for that show. Maybe Dean and Rigin filmed some and producers eventually decided to nix them? Once again, this is all purely speculation in an attempt to make more sense out of why Dean would turn his back on Pillow Talk.

For those of you dying to know what Ricky’s take on the situation is, he offered up his two cents in response to Tarik’s post:

The reason @Tarik_Myers wrote this is because he really tried to keep it in house, I knew about this for months, but Tarik wanted to be the bigger person and not discuss it publicly, however he had to write this now because Dean is stright up bullshi**ing and lying about the truth on that Quarantine program so of course it is warranted for Tarik to offer the truth. Therefore I respect ✊ what he is doing.

Tarik and Ricky are close after Ricky helped Tarik with a couple music video projects. Here’s a link to our story about their first collaboration, which inspired one of my favorite Starcasm 90 Day Fiance Photoshopped images ever: