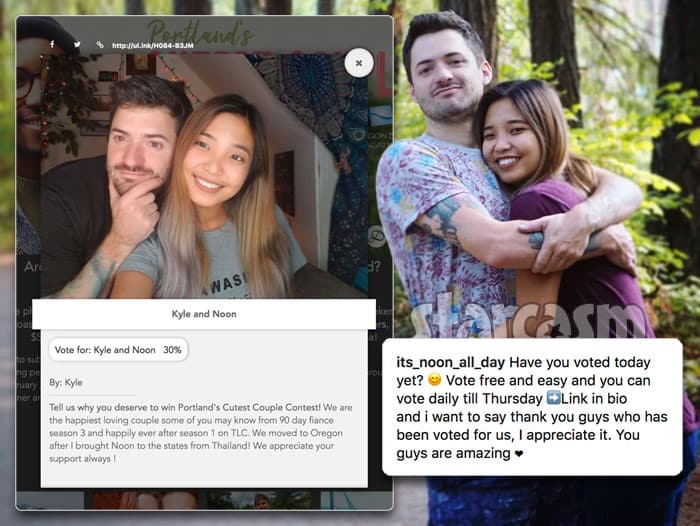 Fan favorite 90 Day Fiance couple Noon and Kyle Huckabee need your help! No, they don’t need donations for their GoFundMe, they’re simply vying for the title of “Portland’s Cutest Couple” in a contest sponsored by local radio station Z100.

“Hi guys! Please help us vote 😃 Kyle and I wanna be Portland’s cutest couple so we can go to the beach 😁😍” Noon tweeted on February 20. Kyle retweeted her and added: “We are trying to be Portlands cutest couple. Could you take a second to vote for us. Its easy, free,and painless and we will love you forever and ever 🙂 ”

In addition to their Twitter pleas, the couple took to reddit to ask for help too. The two were their usual all around awesome selves by offering something in exchange for the support. Noon insisted that people who voted leave a comment so she could thank them all personally, and Kyle did a Q&A in which he answered TONS of questions about their time on the show. Here are both of those posts:

Holy crap family reddit! You guys are so awesome I cant believe my post got like 700 up votes. Could yall gotta help Noon get this spa day. Shes posted already I know but we really could use your help . I want to make this fair so in return ask any production question and I’ll do my best to answer! from r/90DayFiance

According to the radio station’s website, the winning couple will receive “$500 to spend on a romantic weekend at the coast from Oregon Beach Vacations, $500 to spend on jewelry at LaRog Brothers, a $500 Columbia Gorge Outlets shopping spree & $250 at Dosha Salon Spa!”

The couple claimed that they would post a dance video together if they reached 3,500 votes, but they were apparently not able to track the numbers accurately. So, Noon and Kyle made a series of dance videos anyway! Here are a couple of the clips they shared on their Instagram story — just swipe the gallery:

*** Noon had mentioned on Twitter that she was suspicious of the one other couple managing to stay just ahead of them in the contest, and I put together some “evuhdense” that seems to back up her suspicions. But, she has since deleted most all of those tweets, so I have removed those portions of this article. ***

We’re a little late with our post given that the contest started on February 18, but it runs through February 28 so you can all still vote once a day until Thursday! The race looks to be between just two couples, who each have 30% of the vote. (By comparison, third place is at 5%) Every vote counts!

So, if you’re as big of a fan of Noon and Kyle as I am, then be sure to hop on over and cast your vote now! Here is the link to vote once again.