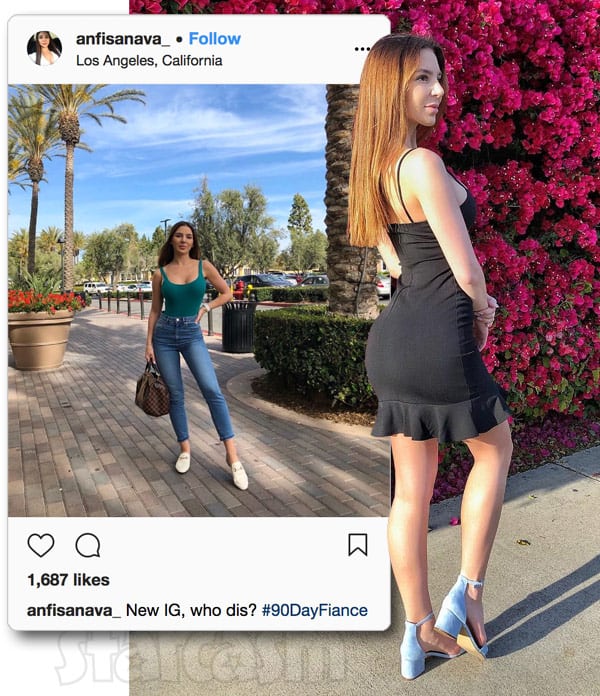 One week after her Instagram account was suspended in the wake of some disparaging posts about her “liar” and “cheater” husband Jorge Nava, 90 Day Fiance and Happily Ever After star Anfisa Nava has returned to the site — albeit under a new user name and without her 250,000 followers.

“New IG, who dis?” Anfisa captioned her first photo back, which featured Anfisa showing off her slender-but-curvy frame in a pair of jeans, a green tank top, and a pair of Gucci shoes.

In her second photo, Anfisa gave her fans a different view: her ample backside packed into a tight black spaghetti strap dress as she stands before a wall of makeup bag-colored flowers. “Just got back from my trip to Washington and enjoying this beautiful Cali weather,” Anfisa wrote, adding the ? emoji.

Here are the original snaps:

Just got back from my trip to Washington and enjoying this beautiful Cali weather ?

Speaking of ample and behind, one follower seemed a bit shocked that Anfisa was willing to give up her quarter-of-a-million followers without a fight. “250 k followeres all lost,” he wrote.

It’s still unclear exactly why Anfisa’s Instagram account was shut down. The only explanation Anfisa has offered is: “A bunch of haters reported my account.” Most people seem to assume that her series of posts about her husband Jorge got her reported and suspended.

The screencapped messages Anfisa posted did include Stevie’s phone number at the time, and Instagram clearly prohibits the publishing of other people’s private information — such as a phone number — without their consent. So perhaps that’s what merited the suspension? And it should be noted that it’s possible Anfisa hasn’t been given a specific reason, either.

Regardless, I kind of side with the Instagram commenter above, in that I am shocked Anfisa is moving on to a new account after building up such a huge following! Of course, if she does eventually get her old account back, I suppose she can just go back to it and pick up right where she left off.

Anyways…Welcome back to Instagram Anfisa! It was certainly a little less entertaining and “psycHOTic” without you!