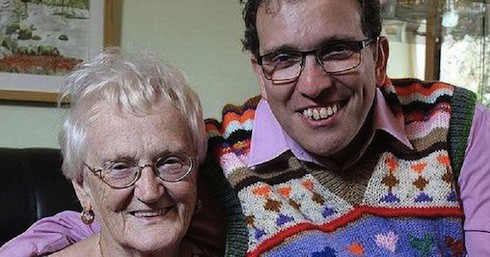 The internet was taken aback earlier this week–and rightly so–when the story of a 76-year-old mother getting kicked out of a KFC for breastfeeding her 42-year-old son went viral. All of the ingredients for a wonderful weird news masterpiece were there: Head-turning headline? Check. Bizarre sexual overtones? Double check. Florida? No, but this allegedly happened in Mississippi, which will do just fine in a pinch.

The story came with eye-bogglingly silly quotes. Here’s what bystander Ali Belfoux was said to have uttered after witnessing the peculiar act:

And here’s what Mrs. Berrety, the 76-year-old in question, was quoted saying in response:

It’s my right as a mother to breastfeed my child. If people don’t agree with the way I raise my son, that’s their problem. I have raised a great man, beautiful, tall, who still lives and stays with me. I think I’ve done a great job as a mother and don’t appreciate getting insulted and expelled just because I decided to breastfeed my child a little longer than other mothers.

And the picture of mother and son–which you can see above, if you’re not dead set on turning away from it–seemed to be the topper. Any man who would wear that sweater that far into adulthood would have no problem with his mother’s breasts in his mouth. Or so the logic went.

Fortunately, the good people at Snopes.com have determined that this story is, in fact, BS. For one thing, there is no mention of where it took place, beyond a single mention of Mississippi (and that does forgive a lot); there’s also a great deal of slang and general un-journalistic writing in the original article.

There’s also the fact that “Newswatch28.com” was a short-lived fake news site. Their current top story is “White Castle employee dies after co-worker eats her face.” The cadence of that headline is similarly ridiculous.

It’s further worth pointing out that science tells us a 76-year-old woman is very likely not breastfeeding. But the internet loves a good story more than it loves science–and, when Snopes is around to eventually tell us the truth, it’s hard to cast blame.

Does Suddenly Royal’s David Drew Howe have a claim to the King of Mann title?