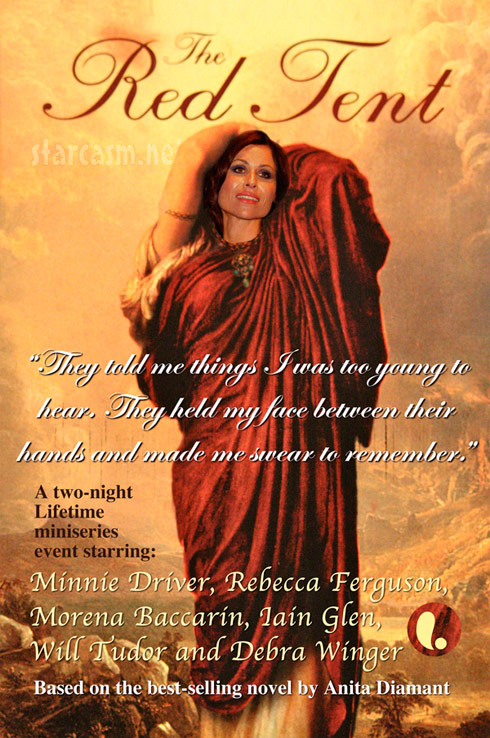 Lifetime continues it’s blockbuster original movie programming success by tackling another New York Times Bestseller, this time the Biblical-based novel The Red Tent by Anita Diamant. Following on the heels of the network’s adaptation of V. C. Andrews’ gothic novel Flowers In the Attic (and the sequel, Petals On the Wind, premiering May 26) Lifetime has once again assembled a stellar award-winning cast for The Red Tent that includes Minnie Driver, Rebecca Ferguson, Morena Baccarin, Debra Winger, Iain Glen and Will Tudor. Production has already begun in Morocco, though no official premiere date has been announced.

The Red Tent tells the story of Dinah, daughter of Leah and Jacob, who was mentioned only briefly in the Old Testament. Diamant took full advantage of that brevity by filling in Dinah’s sweeping tale with a fresh and intimate take on the role of women in a Biblical context.

Here is a description of The Red Tent from the Lifetime press release announcing the project:

The miniseries begins with Dinah’s (Ferguson) happy childhood spent inside the red tent where only the women of her tribe are allowed to gather and share the traditions and turmoil of ancient womanhood. Told through Dinah’s eyes, the film recounts the story of her mothers Leah (Driver), Rachel (Baccarin), Zilpah and Bilhah, the four wives of Jacob (Glen), and his courtship of them. The saga continues as Dinah matures and experiences an intense love that subsequently leads to a devastating loss, changing the fate of her and her family’s lives forever. Winger portrays Rebecca, Jacob’s mother while Tudor stars as Joseph, Dinah’s brother.

“The Red Tent brings premium and popular elements to a unique and timeless story,” said Rob Sharenow, EVP and General Manager, Lifetime. “It perfectly articulates our vision for Lifetime as the destination for epic movie events.”

This is going to be epic! Literally! 🙂

Meanwhile, you have plenty of time to read The Red Tent prior to the premiere: