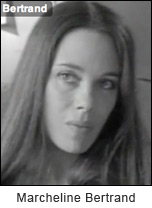 Holy Jolie! Here’s a video featuring Angelina Jolie’s mother Marcheline Bertrand in a promotional film reel that features scenes from a 1980 Ramon Mendendez movie starring a young Bertrand. The reel was meant to be shown like a resume, featuring a brief introduction by Marcheline and then a couple minutes worth of footage from the black and white independent film Borderline.

I was absolutely floored by how similar Angelina and her mother look! I got a little curious about Marcheline’ story so I did some research online and figured I’d post a brief summary here.

Marcheline Bertrand was born May 9, 1950 in Riverdale, Illinois and moved to Beverly Hills in 1965 where she attended Beverly Hills High. In December of 1971 she married actor Jon Voigt and they had two children, both of whom became actors themselves. Their son’s name is James Haven and, of course, their daughter is Angelina Jolie.

Marcheline and Voigt separated in 1976 and their divorce was finalized in April of 1980. Bertrand met Bill Day, a documentary filmmaker, in 1978 and the couple lived together until 1990.

Day and Bertrand attempted to have children but after numerous miscarriages were ultimately unsuccessful. Her acting career eventually shifted to producing and Trudell

, a documentary about Native American activist John Trudell that Bertrand was the executive priducer on, was shown at the Sundance Film Festival in 2005.

Angelina Jolie often praises her mother and cites her as her main inspiration for choosing acting as a career as well as the motivation behind her involvement with so many charitable projects. Here is a tearful Angelina talking about her mother during a press conference promoting Jolie’s 2008 Oscar-nominated movie Changeling

(For more info about Marcheline Bertrand, visit her wikipedia entry)

A suicidal Angelina Jolie once hired a contract killer to end her life?