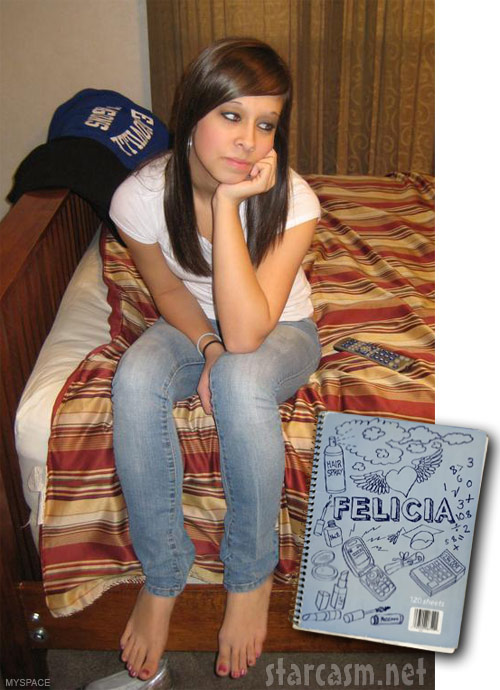 Episode 2 of 16 and Pregnant Season 2b features Felicia Cooke, a half-Honduran high school student from Lewisville, Texas. Here’s a little background info on Felicia pieced together from numerous sources on the web including her official Facebook fan page and her Formspring account. (Please note that these girls have a terrible time with people creating fake profiles on the various social media sites. The two links here are legit and verified as Felicia or her official representative – anything else is probably a fake.)

Felicia Annette Cooke was born December 16, 1992 to a Honduran mother and Caucasian father. I couldn’t find out exactly where she was born but she does state on her Formspring account that she was born in the United States so I assume it was somewhere in Texas. 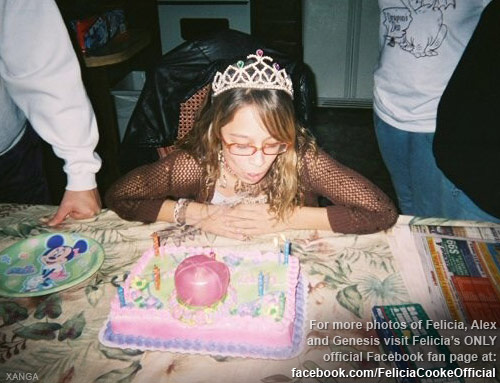 Felicia Cooke blows out candles on her 13th birthday cake

At the time of the filming of 16 and Pregnant Felicia lived in Lewisville, Texas, which is a suburb of Dallas located about 20 miles northwest of The Big D.

She began dating Mauricio Alejandro Gutierrez in 2007 and according to Felicia they first had sex when she was 15. The sexual relationship continued without the use of birth control for a year and a half before Felicia found out she was pregnant. The couple met because Alex, which is the name Mauricio goes by, was the cousin of Felicia’s best friend. 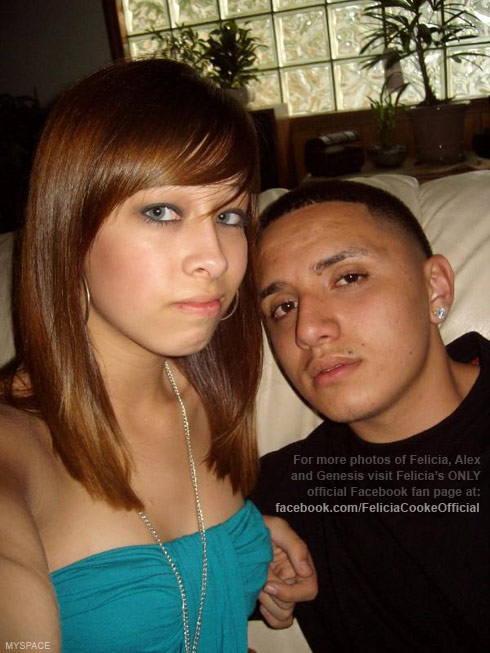 Prior to giving birth Felicia was hoping for a boy and planned to name him Jaylen Alexander Gutierrez, but when the stork finally landed it delivered a daughter and the couple named her Genesis Alexa Gutierrez. (Alex chose the name, which beat out Serenity and Henacy.) Genesis was born at 12:06PM on February 25, 2010 and weighed 7lb 2oz. 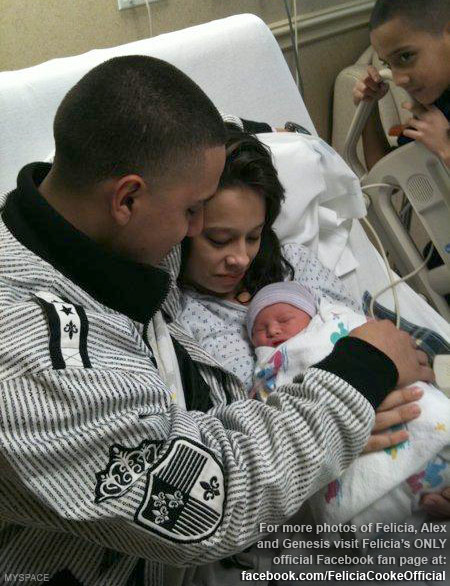 As evidenced in the clip Felicia’s mom has issues with Alex and there was a time soon after Genesis’ birth that she and her mom were concerned about his level of commitment to being a father. But it appears from recent posts made by Felicia on Facebook and Formspring that Alex has stepped up and the couple are still together! Alex is currently working as a barber in the Dallas area.

On another positive note, Felicia graduated high school on June 13, 2010. She is the first in her family to graduate high school and deserves a lot of credit because, as fans of the show know, it is so difficult for teen mothers to find the time to prioritize their education.

Here’s the preview clip from MTV of Felicia Cooke’s 16 and Pregnant episode, which is set to air November 2, 2010:

Wow! That scene where Felicia’s mom is knocking on the bathroom door asking “What are you doing in there?” followed by Felicia’s voiceover narration saying, “But she doesn’t have to guess what goes on behind closed doors anymore,” is too much! And just in case you couldn’t figure out for yourself what Felicia and Alex were doing in the bathroom there are plenty of racy photos online documenting it for you: 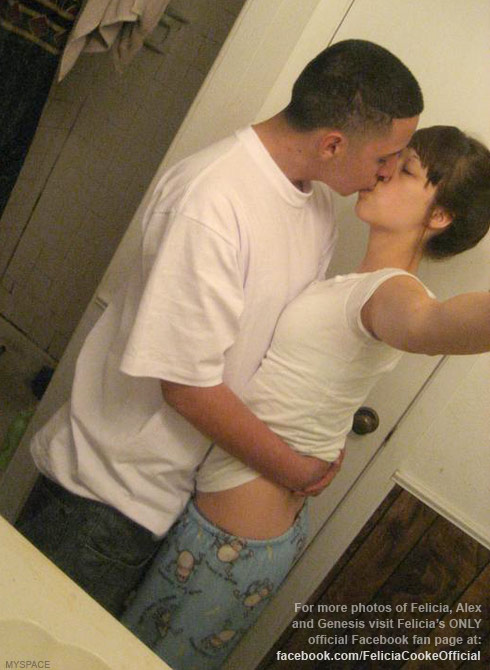 To Felicia’s mom: HERE’S what they’re doing in there!

In case the basic bio wasn’t enough here are some questions and answers from Felicia’s formspring that provide a glimpse in Felicia’s take on abortion, getting married and what she spent her 16 and Pregnant paycheck on!

Q: Now that you have experienced motherhood, school, relationships etc. at such an early age, what do you recommend to these young girls about to watch your show and think of you as a inspiration?
A: well i deff. didnt try to glamorize being a teen mom so anyone who views me as an idol or nything is just completely missing a part of their brain or something! being a teen mom is deffinately not easy there is lots of work involved nothing is about me anymore its all about her now lots of money goes soely to her also its a big responsibility

im thinking about doing 16 & p but someone told me mtv trys to break the couple up for the ratings , is that true ?
uhm not entirely but they do start things

what do you mean start things ?
they’ll put u to talk about a situation in yall’s relationship that will most likely start an argument 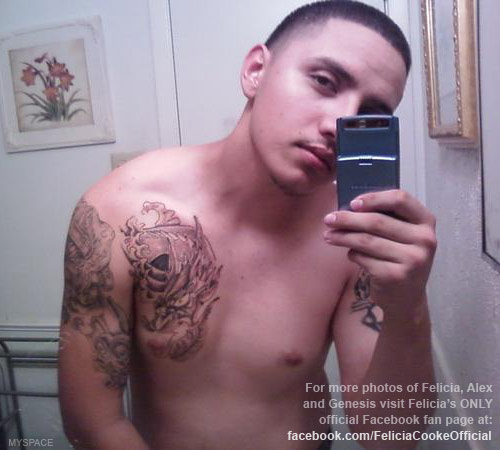 Alex shows off his pecs and tats in a cellph portrait

What’d you do with your money from MTV?
bought a car

what kind of car do you have?
neon

would you do the show again?
well i plan on doing teen mom possibly

if Genesis was a boy what was the name you had picked out?
if i had a boy i wanted to name him jaylen alexander gutierrez(:

How many tattoos do you have and what are they of and what others do you wanna get?
i have one tattoo and its just a little heart with wings u will see it on the show(:

I was just wondering if you ever considered having an abortion and what are your thoughts about it. I don’t mean anything, just curious that’s all. =)
no never i dont believe in abortion at all i m the one who went out there and thought i was old enough to be having sex and this is wat happened so i believe i should take care of my responsibilities and grow up

could you go the rest of your life without having sex?
yeah 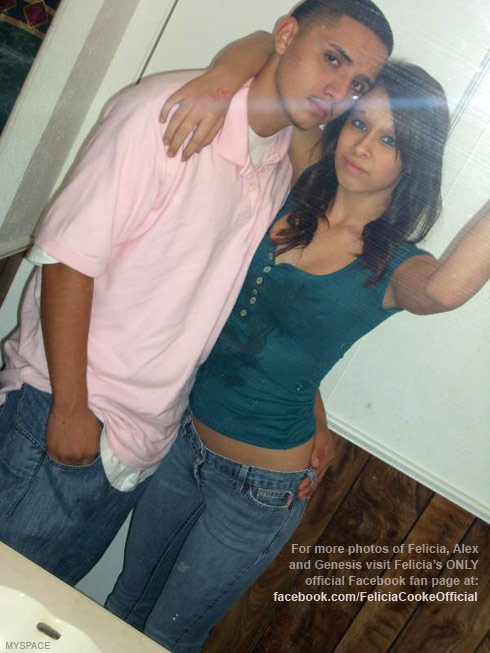 I don’t think anyone would argue that Alex and Felicia are an attractive couple!

Do you want more children? Do you plan to have more? When would you like to have them?
yes i do plan to have more and well im on bith control right now for 3 years and after thats done i plan on having nother one

Do you watch Jersey Shore? If so, who’s your favorite? (:
yes i do and vinnie (:

I’ve done posts on Felicia and Episode 1’s Brooke Smitherman-Tarrant and I have to say that so far I like both of these girls! Of course my opinions could change once the episodes air, but from what I’ve seen they both appear to be grappling with the consequences of their actions in a mature manner given their young age. Neither seem to be in denial or hung up on missing out on high school parties or in a toxic relationship, although Felicia’s baby daddy Alex seems to be a bit of an x-factor as far as whether or not he is going to fully “step up” for Felicia. But, judging from what Felicia is saying online he is heading in the right direction. What do you think? Have any opinions on Felicia and Brooke yet?

UPDATE – MTV has posted a preview clip from Felicia’s episode featuring her and Alex having a serious discussion about responsibility and the future of their relationship:

Catch up on your 16aP as well as Teen Mom from amazon: