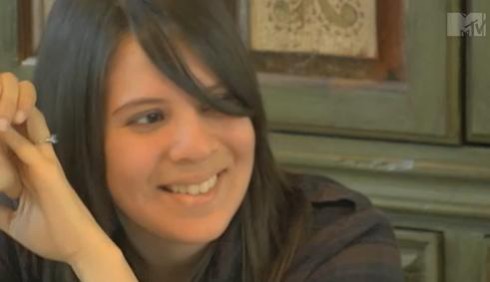 Ashley Salazar was the featured teen mom on the season finale of MTV’s most recent run of 16 and Pregnant.  We followed along with Ashley as she struggled with the impossible decision of whether to keep her baby or give her up for adoption.  Her aunt and uncle offered to adopt and Ashley made the painful and mature decision to let loving family members care for and raise little Callie.

In a recent post we featured Ashley’s response to the airing of her episode which came nearly a year after filming.  She took to her Facebook page and blog to discuss her life since the difficult choice.  Following up on these comments Ashley sat down for a candid interview with Radar in which she opened up about the tidal wave of varying emotions that came along with the entire process.

Here’s a brief excerpt from the interview:

Radar: You made a mature but very heart wrenching decision to put your baby up for adoption, how confident are you that made the right choice?

Ashley: I honestly don’t think that I will ever be 100 percent confident in my decision. I suffer every day for it. Some days, I am right back to square one, feeling like I did in the hospital; confused, depressed, and uncertain. The only thing that I am confident in is that she is taken care of every day and has everything she not only needs, but could ever want, as well.

Radar: How do you think your life would be different today had you not gone through with the adoption?

Ashley: I think I might have been a tad bit happier, but the stress would have canceled some of that happiness out. When I find out about all the expenses that my aunt and uncle have to take on, I feel relief. I do know, though, that Callie and I would have been just fine and happy together, but at what cost? I would never be around.

Radar: What would be your advice to young teens who are considering adoption?

Ashley: Wow, I could write a speech… Think long and hard about what you really want. Weigh out your options – pros and cons. Think long and hard about what you want for your child, first of all. Try not to be so biased when your feelings get in the way, and try not to listen so much to other peoples’ inputs. It’s not worth it. It’s too confusing. You and of course, your child, are what matter the most. Lastly, I’m going to be honest, because I believe that teens need to know this before hand: adoption hurts like hell. It could possibly destroy you for a while. You won’t be able to sleep. You won’t be able to eat. You won’t be able to look at other babies, and there will be days you might feel like you can’t go on living. If you aren’t going to see your child regularly, I wouldn’t recommend bonding with it for 48 hours in the hospital like I did. Depressing, I know, but it gets better. There’s always a light at the end of the tunnel. Most of all, do what you think is best for your child. Your child comes before you always. If you are religious, pray and pray.

Ashley’s comments seem to endorse the recent study that indicates that the shows 16 and Pregnant and Teen Mom create a deeper understanding of the issues of teen pregnancy and in turn can actually help prevent them.  If you’re interested in reading the entire interview I encourage you to check that out here.