Through all of the insane twists and turns that resulted in Farrah going “there” it became evident that the Teen Mom vet had a price. Well apparently the duds she donned on the cover for Farrah Superstar: Backdoor Teen Mom, also has its own price — the bidding has started at $500.

I wasn’t so sure that this was the authentic item — and I’m still not — but TMZ, who apparently has a direct line to Farrah and Vivid, added additional info about the condition of the suit that is not listed on the sale lending credence to the possibility. Speaking of the listing, here’s the sales pitch from the auction:

“Don’t miss this once in a lifetime chance to own a piece of pop-culture history! The winning bidder will receive the actual bikini worn by Teen Mom and new celebrity sex-tape sensation Farrah Abraham in her record-breaking DVD! Farrah wore this bikini in her private photo shoot for “Poolside Collection” swimwear before it was catapulted into the annals of sex-tape history when it appeared on the cover of “Farrah Superstar: Backdoor Teen Mom.” And now for one lucky fan only…Farrah’s bikini…straight off her body and into your hands!” 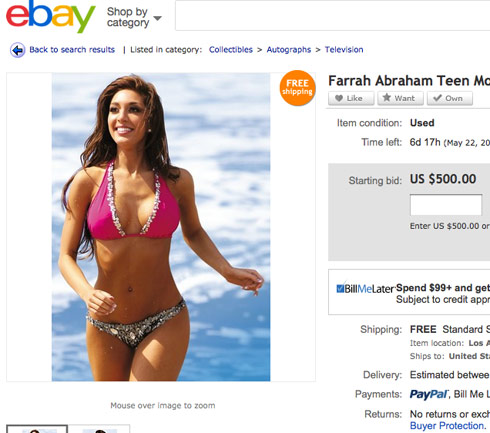 The auction began at midnight and so far there’s been no bidders. TMZ was told that the bikini shows overt signs of wear, including fake tan stains and glitter from Farrah’s body lotion.