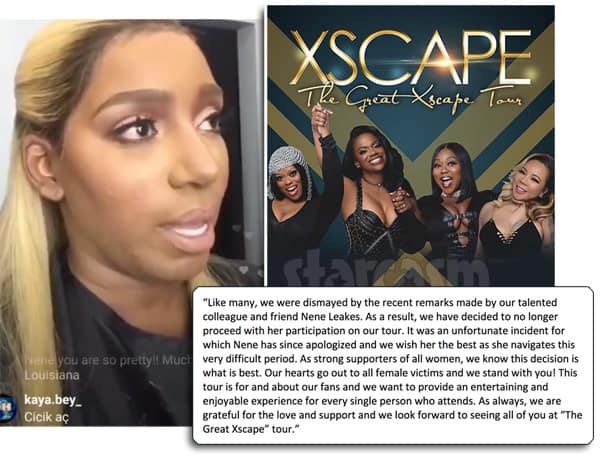 The fallout continues after The Real Housewives of Atlanta‘s NeNe Leakes made a reprehensible rape joke during her “Girls Nite Out for Laughs” comedy performance this weekend. Kandi Burruss’ band Xscape has just released a statement announcing that NeNe has been fired from her job as host for the band’s highly anticipated reunion tour. After the announcement, NeNe took to Instagram live and offered up her latest thoughts on the controversy.

First, here is the statement from Xscape:

Like many, we were dismayed by the recent remarks made by our talented colleague and friend Nene Leakes. As a result, we have decided to no longer proceed with her participation on our tour. It was an unfortunate incident for which Nene has since apologized and we wish her the best as she navigates this very difficult period. As strong supporters of all women, we know this decision is what is best. Our hearts go out to all female victims and we stand with you! This tour is for and about our fans and we want to provide an entertaining and enjoyable experience for every single person who attends. As always, we are grateful for the love and support and we look forward to seeing all of you at “The Great Xscape” tour.

And here is a video clip of NeNe, who looks to have moved past the initial apology and the tearful remorse stage, and is now getting to the #BloopBloopWhatevs and #SMDH stage:

When I do my comedy show from now on, when we go back out on the road I’m gonna have a note at the door that says “Plead the 5th. Y’all come in at your own risk.” Or just, “Do not — this is not the place to come if you gonna clutch your pearls” or something — I don’t know. We’re just gonna be from now on, just be like…oh, God. I gotta talk to all the other girls who are out on the road with me, you know, about what we — I guess we’re gonna have meetings about what we talk about. I didn’t know that we needed to do that. We talk about our life experiences… 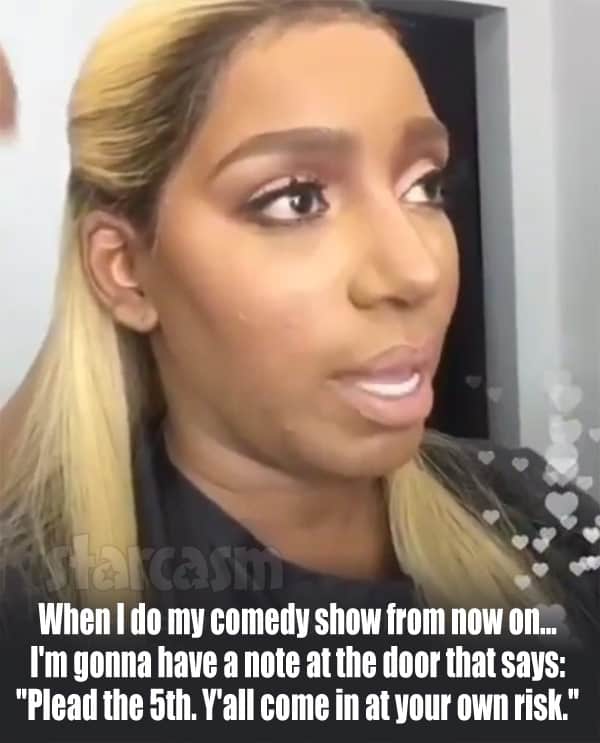 I think we can assume that NeNe will remain a part of the “Girls Nite Out for Laughs” comedy tour — for now. It has been widely reported that NeNe’s job with Bravo may be in jeopardy as well, but niether Bravo nor NeNe have addressed those reports.