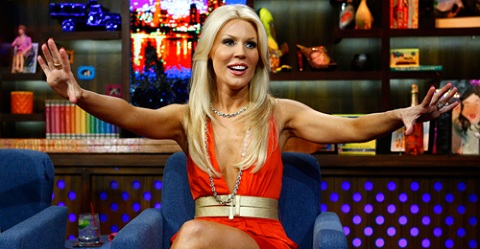 Gretchen Rossi and her boyfriend Slade Smiley have been together for years now. Although Gretchen has been vocal about not  being ready to get married, she is ready to make a commitment of another kind — a baby! The Real Housewives of Orange County star has been talking about getting pregnant for months — could she get pregnant soon?

Last month, Gretchen revealed to Life & Style that she and Slade are both ready to have their first child and are making a necessary adjustment. “We’re redoing our house and figuring out where to put the nursery,” she explained. Gretchen would love to have a boy and a girl with her man. “I’m so excited about playing dress-up and having matching outfits with a girl, and I would be just as blessed to have a little boy, too. We’re very excited about starting a family.” So are fans! We’d love to see Gretchen sporting a baby bump. Plus, she’s the only housewife without kids so she’s due for one!

During an appearance on Watch What Happens Live last night, Gretchen announced, “I’m ready to have babies now!” She even joked (we think) that she may be pregnant now! However, she was drinking so she must not be quite yet. In fact, Slade is gonna have to get his vasectomy reversed to make that happen (no word if he’s gone back under the knife yet.)

Even though she’s probably not expecting yet, she doesn’t want to wait much longer. “We talk about babies every day; I wouldn’t be surprised if they come before a wedding or engagement!” That means we could see a pregnant Gretchen any day now. The bump watch begins now!