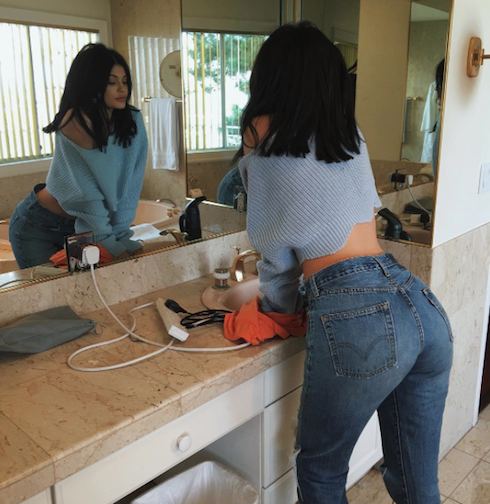 Why is Kylie Jenner dating Tyga? Fans and innocent onlookers across the globe are asking the question in an increasingly loud chorus, thanks to a string of alleged questionable decisions by the Tygster and to Kylie’s apparent inability to stay broken up with him. Sources close to the couple say there are a number of reasons for their bond, which has survived two breakups and (at least) three cheating rumors.

Most recently, Kylie chose to stick things out with Tyga despite the rumors–some of which have been confirmed–that he sent a series of “inappropriate” text and social media messages to a 14-year-old girl he met on Instagram. Before that, there was the time they broke up this past autumn, following weeks of sniping at each other through friends and sharing subtle digs; that breakup, though, only lasted one day. The pair also separated–briefly–last spring, before Tyga made amends with a picnic on the Cal State-Fullerton campus, plus an onstage tribute to Kylie during a live show later the same night.

And, according to related claims, Tyga has borrowed an accrued $500,000 from Kylie, over the course of their friendship and later romantic dealings. That news led to the story that a cash-strapped Tyga–who has bought Kylie at least two cars, the combined value of which totals around $720,000, over the past year–was planning to burn his Kardashian bridges and pen a tell-all book about the family in order to earn real money for the first time since “Rack City,” his only hit, charted in 2011. 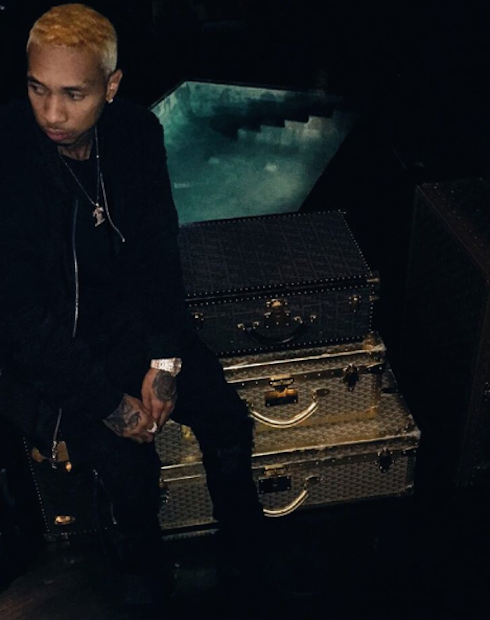 And it might be as simple as all that. A new report from In Touch states that matriarch Kris Jenner is trying to get Kylie off of her Tyga kick, warning the 18-year-old budding mogul that Tyga, 26, is “only after her money.”

Said a source close to the action, “Kris feels Tyga needs to grow up. She’s really fed up with him….[Tyga] is running out of chances and excuses.” Not that Kris is too worried about Tyga’s ability to get any more money than what he has coming to him in Keeping Up With The Kardashians residuals. Concluded the source, “Kris has got a dead man’s grip on the family’s fortune and she will protect the empire.”

Of course, Kylie Jenner dating Tyga has been a fraught topic since the then-14-year-old met Tyga for the first time. They’ve been a rumored couple since she was 17 (or 16, depending on which reports you believe), and many observers feel that, because they got together at such a young age, Tyga has warped Kylie’s sense of what to expect from a man. A series of recent reports claim that Kylie’s young, heretofore unchecked ego is out of control–something apparently evident in a new Mirror article on Kylie’s widely mocked 2016 New Year’s Resolutions video:

It’s also worth mentioning that there’s at least one major editorial calling for an end to Kylie Jenner dating Tyga. Entitled “It’s Time for Kylie Jenner to Break Up with Tyga,” the Cosmopolitan piece is straightforward in its assertions:

I realize it’s messy to speculate about the state of someone else’s love life, especially that of a stranger. But I hate him so much that I don’t care. Here’s reason no. 1 Tyga is no good for Kylie: He’s predatory….Tyga has a type, and that type is underage….Tyga is professionally and personally beneath Kylie, as anyone with access to the Internet knows. Even before Lip Kits and Snapchats, she had more credibility and money than he ever did. Homie is, compared to the Kardashian/Jenners, impoverished. In an all-too-short breakup this winter, Kylie made Tyga move out of her Hidden Hills kingdom of Calabasas, and he now rents a place above the Sunset Strip.

Why is Kylie still with tyga..

Why is Kylie still with tyga….this is the 3rd (??) time he’s been accused of cheating

Why is Kylie still with Tyga god what is she thinking — Kanye (@Herrfizzy) January 5, 2016

Why is Kylie still with Tyga again??? Oh yeah. Cause she don’t love herself.

Why is Kylie still with Tyga anyway — cait (@CaitlynMcCowan) January 8, 2016

Why is Kylie Jenner wasting time with tyga. What is tyga. He’s only relevant now because of her.

Why is kylie Jenner with that tyga guy, I’ve seen fucking hippos better looking than him — hastewell (@ryanhastewell) December 27, 2015

Why is Kylie with Tyga.. He’s so irrelevant and his music is straight ?