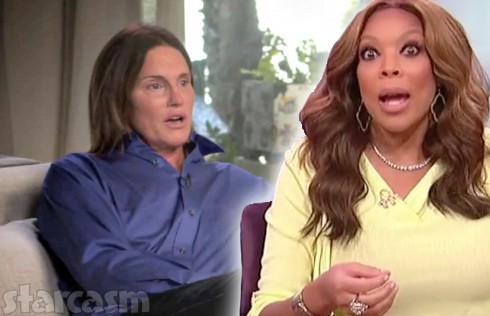 Bruce Jenner’s long-anticipated interview with Diane Sawyer airs tonight and my impression is most people think he is brave for (likely) opening up about his gender transition. Not Wendy Williams. Nope, the talk show hosts just think Bruce is revealing himself to be a “fame wh*re.”

Speaking on Thursday’s episode of The Wendy Williams Show, Wendy said she has no desire to watch the interview because she feels “duped” by Bruce.

After taking a break while the audience applauded, Wendy continued by taking aim at Bruce’s parenting.

“Here’s the other part of it… Bruce has a daughter who is 17, involved with a 25-year-old father of one… And she’s a high school dropout and she’s messing with her face and her boobs and her behind way too early in life,” Wendy said. “Bruce has bigger fish to fry than turning into Belinda!” (Her comments on Bruce begin at the 2:58 mark.)

“I’m all for and very happy for anybody who lives in their own truth, including Bruce transitioning. But he should have thought about that before having all the kids,” she said after explaining she doesn’t believe his kids are fine with seeing him in women’s clothing. “Like, you’ve got kids to explain to and you can’t tell me Kylie’s the only one not going along with this. Belinda, shame on you!”

Although everyone in the audience (who the camera crew chose to zoom in on) seemed to agree with Wendy’s opinions, the same cannot be said for people commenting online.

“The way you’re attacking Bruce’s transition is inappropriate,” one commented on the YouTube video. “I understand the parenting, but I doubt you actually understand how she feels going through the transition.”

Another said, “Wendy will never truly understand what Bruce is going through, because she is not transgender. I think she disregards Bruce and thinks her transition is not a big deal. Her transition is making it normal for non-celebrity people, and it comes at a time when trans individuals are being discriminated for simply going to the bathroom.”

Carlos Maza, the LGBT program director for Media Matters for America, said he thought the segment was “some of the grossest, transphobic BS I’ve seen on TV.” He added…

I watch transphobic conservative media for a living, and I can't remember ever seeing something this awful. Shame on @WendyWilliams. WTF.

VIDEO Mike Huckabee says you can’t really be transgender, he would have ‘found my feminine side’ to shower with women