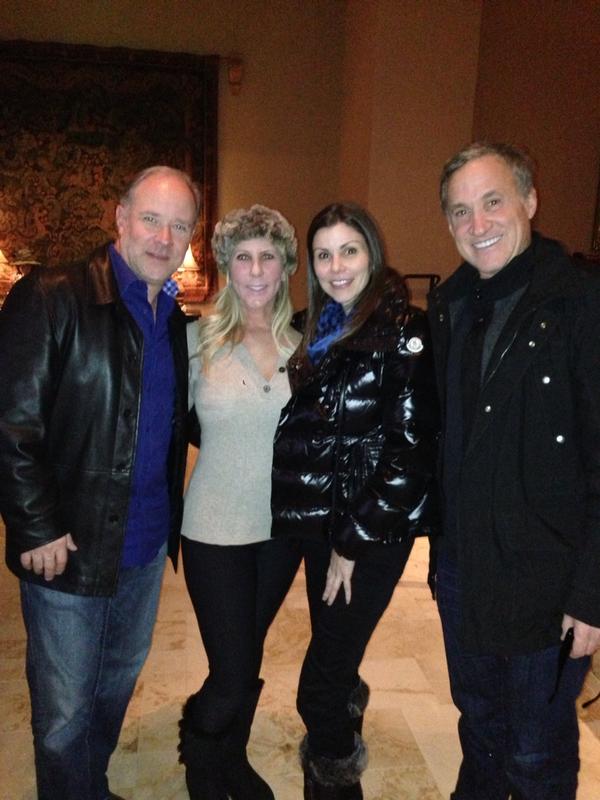 It appears as though The Real Housewives of Orange County‘s Vick Gunvalson couldn’t do without her daily email affirmations because she was photographed spending New Year’s Eve with her ex Brooks Ayers! The couple reportedly split up a few months ago, much to the satisfaction of former Vicki bestie Tamra Barney and Vicki’s daughter Briana Culberson (as well as most RHOC viewers).

Yesterday, Vicki told her Facebook followers, “In Deer Valley for New Year’s Eve. It is going to be an amazing dinner and dancing with great people. Football with Heather tomorrow. Everyone please be safe tonight and do not drink and drive! HAPPY NEW YEAR!” It seemed innocent enough, but she wasn’t telling the whole story.

Later that night, Terry spilled the beans when he tweeted the above photo to fans with the caption, “In Deer Valley!! @HeatherDubrow @VGunvalson @BrooksAyers.”

And there you have it.

What’s worse? Since the eighth season of Real Housewives of Orange County is currently filming, it looks like we’ll be seeing Brooks (and his endless supply of Hallmarkisms) on screen again when the ladies return to Bravo this spring. But if it makes you feel better, he won’t be on the first few (at least) episodes. Either way, he’s sure to cause some drama between Vicki and the ladies — especially Tamra Barney, who Vicki seemed to reconcile with recently. The news is especially disappointing for those of us hoping to see Tacki 2.0 during the upcoming season. 🙁

Are Hilary Duff and Mike Comrie back together? Split spouses look cozy at Coachella

Russell Brand jokes about sex life with ex-wife Katy Perry, says he thought of “anyone else”

Are Catfish’s Jesse and Brian still together?