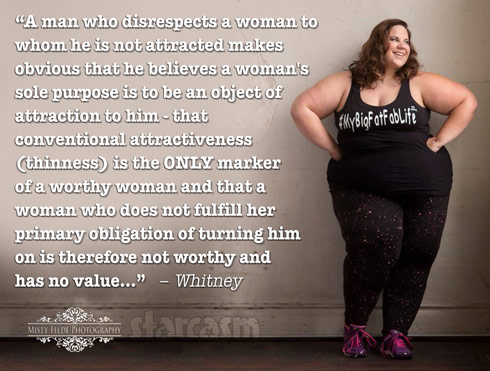 #NoBodyShame spokesperson and My Big Fat Fabulous Life reality star Whitney Way Thore is at the forefront of the fat acceptance movement, and she recently took to her Facebook page to explain how she perceives the connection between fat acceptance and feminism.

Posting excerpts would only take away from what Whitney had to say, so here is her entry in its entirety:

I’ve heard many people ask what feminism and “fat acceptance” have to do with each other. (For my purposes, let’s say “fat acceptance” means that even people who exist in fat bodies or bodies that are not conventionally attractive still deserve basic human respect from others and that these bodies do not strip them of the right to feel worthy, valuable, or beautiful.)

A man who disrespects a woman to whom he is not attracted makes obvious that he believes a woman’s sole purpose is to be an object of attraction to him – that conventional attractiveness (thinness) is the ONLY marker of a worthy woman and that a woman who does not fulfill her primary obligation of turning him on is therefore not worthy and has no value.

As a woman and a feminist, I wholeheartedly know that how attractive I am to a particular person, or society at large, does not dictate how smart I am, how capable I am, how talented I am, how well I can serve others, or how I happy and fulfilled as a human being I can be. I know that my life and my purpose are so much bigger than being attractive to someone. So I would urge my sisters – especially those of you who ARE thin and/or conventionally attractive – if your man sees fat women as unworthy human beings simply because they are fat, take notice. He may think you’re worthy, but this kind of acceptance is conditional and you are worthy regardless of your waistline. #MyBigFatFabLife #nobodyshame

In addition to the post, the always fan-friendly Whitney also responded to commenters:

COMMENTER: I think you’re gorgeous inside and out, and im sure you’ve been asked this before, but can you not have the surgery to help you lose the weight? Again, i adore you, and think you’re an amazing inspiration… i was just curious about where you stood with weight loss surgery.

WHITNEY: Danna, I would not consider medical intervention unless a doctor told me it was absolutely medically necessary! I certainly don’t judge people who go that route though. 🙂

COMMENTER: You are my daughter’s age, and I’m glad you’re doing so much to raise awareness and promote fat acceptance. I wish people like me had had a voice like yours in my day; by now, I fear it’s too late for me to feel beautiful. I will be 65 in two days.

WHITNEY: Ginny, it is NEVER too late!

COMMENTER: Whitney, I think there is some assumptions going on in your assertion that just because a man disrespects someone they are not attracted to that that means he thinks her sole purpose is to be an object of attraction. Setting aside the fact that we should be respectful to everyone, it is totally possible for someone to be both physically unattractive and a person “not worthy” of respect. I mean, being either female or unattractive to a particular person does not preclude someone from being a nasty human being.

WHITNEY: I agree of course – I thought the sentence “to whom he is not attracted” implied that being the reason for the disrespect and then later, I said “if your man sees fat women as unworthy simply because they are fat” … I think we’re on the same page 🙂

After the feminism post, Whitney followed it up with a great quote clarifying the “No Body Shame” campaign:

How many ways are there to say, “I don’t care if you don’t want to sleep with me; just treat me like a person”?

I feel like there must be some way to say it to make misogynists understand. 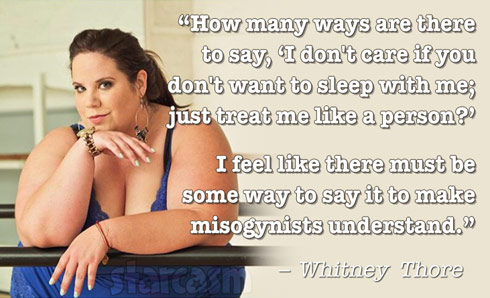 Whitney Way Thore and her friends and family will be returning to TLC for My Big Fat Fabulous Life Season 2 some time this summer.