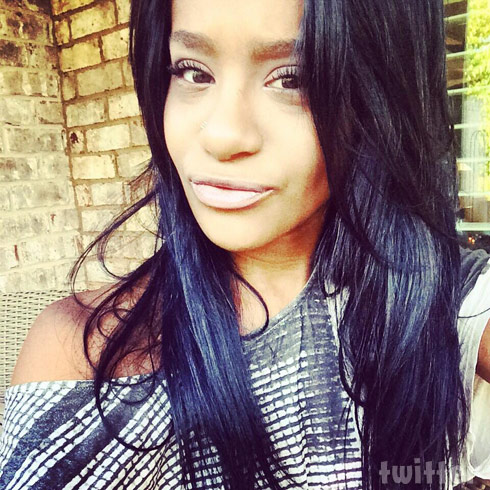 According to police, Whitney Houston’s daughter Bobbi Kristina Brown was found unconscious in the tub of her Georgia home Saturday morning. Roswell police say that Bobbi’s husband Nick Gordon and a friend found Bobbi unresponsive in the bathtub and began CPR until police and medical crews arrived on the scene. Bobbi was taken to North Fulton Hospital and is reportedly in ICU able to breathe on her own.

The incident occurs less than two weeks from the three-year anniversary of Bobbi’s mother, Whitney Houston’s death. Whitney died on February 11, 2012 in the Beverly Hilton Hotel. Her body was found in the bathtub and it was later determined by the Los Angeles Coroner’s Office that Whitney Houston’s cause of death was drowning and the effects of atherosclerotic heart disease and cocaine use.

Bobbi Kristina and her now-husband Nick Gordon have made numerous headlines over the last few years, not the least of which was the fact that they were a couple at all given that Nick was Bobbi’s informally adopted brother after being taken in and essentially raised by Whitney and Bobby Brown. Bobbi and Nick announced their engagement on the family’s Lifetime reality series, Houstons On Our Own.

Judging from her Twitter account, things had been looking up for Bobbi Kristina lately as she prepared to follow in both her parents’ footsteps and pursue a career in music. She excitedly tweeted as recently as Thursday about it:

She even sent out tweets to Ne-Yo and Wiz Khalifa seemingly suggesting that they should record together:

@NeYoCompound can we please get into this studio together already !? much love ! #makemagic

Her last tweet was to another musician, singer-songwriter Bess Beckmann, and although it could have been relatively innocent, given what happened earlier today it now seems a little more concerning:

@bessmakesmusic Sarah I miss and need you

So far there has been no official statement from Bobbi or Nick or their representatives.

Bobby Brown consumed by guilt over Bobbi Kristina’s death, heartbroken he didn’t “save” her