Here’s the full video of the surprisingly entertaining and dramatic reunion of the cast of MTV’s Jersey Shore. 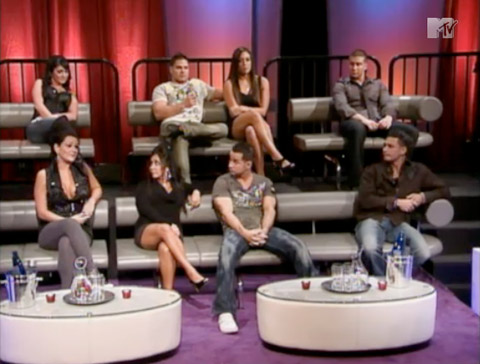 America’s favorite Guidos and Guidettes reunited for an entertaining hour of looking back and looking forward on MTV’s Jersey Shore Reunion Special January 21. Up until I watched the reunion I had my doubts that this group could capture lightning in a bottle again in their second season, but despite all of their successes they still seemed to have the capacity to be authentically aggressive and dramatic! Now I’m a little excited about round two next summer!

The Situation’s hubris is completely undiminished, as is his Platonic and symbiotic relationship with WIngman Pauly D. J-Woww, Angelina and Vinny maintain their roles as secondary, slightly less dramatic characters while Ronnie and Sammi “Sweetheart” ratchet up the drama after bonus footage is shown of Sammi participating in some jealousy-inducing activities with The Situation!

Just like a regular episode, The Reunion had moments of pure jaw-dropping WTF mixed with chest and fist pumping and more classic one-liners from the most entertaining and almost charming batch of irreverent jerks and jerkettes to ever grace the small screen. SIGH. My Thursday night reality fix is now in the hands of the Real Housewives of Orange County.

VIDEO: Golden voiced Ted Williams 2008 ‘I Got My Whiskey’ promo