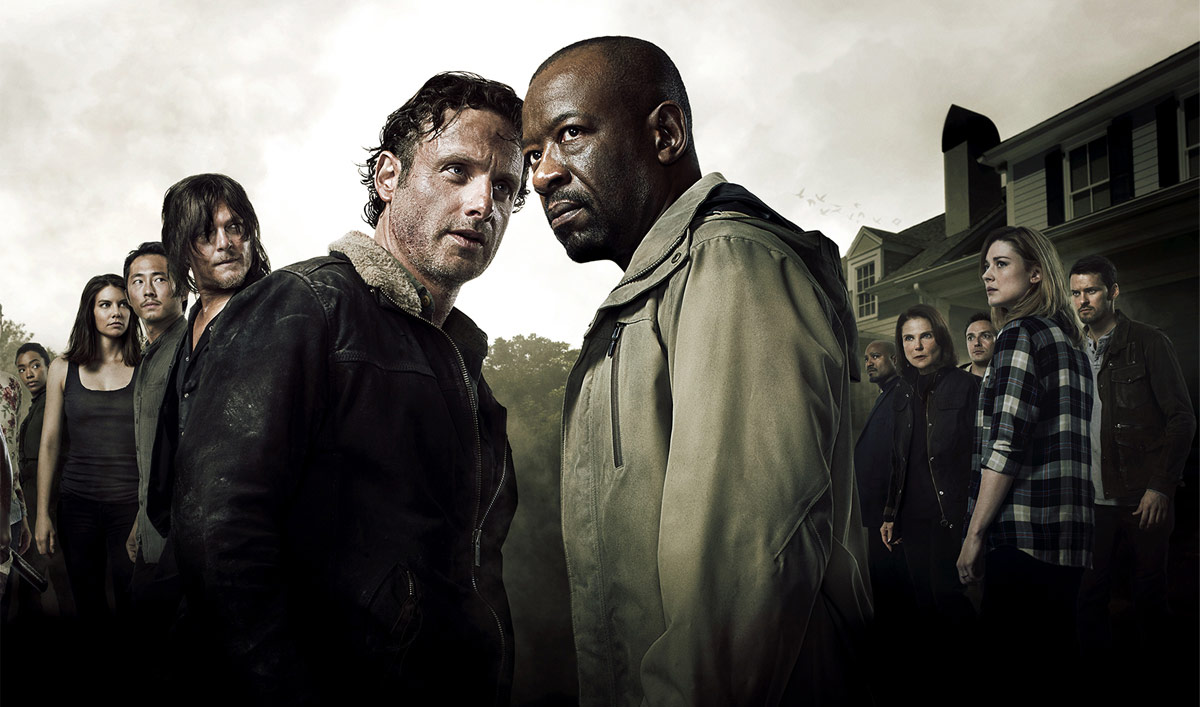 Just when it appeared that Rick had convinced the naive townsfolk of Alexandria that sometimes war is the answer, in walked the peaceful post-zombie-apocalypse pro-pacifist Morgan. Judging from the first Walking Dead Season 6 poster released by AMC, it appears that Morgan’s presence will once again divide the cast, with the original crew on the side of Rick, and the residents of Alexandria backing Morgan.

The poster also uses the age-old imagery of wilderness versus civilization in the split screen, with the natural backdrop of a forest behind Rick Grimes and his TWD OGs, and the suburban homes of Alexandria behind Morgan.

Among the characters behind Rick are Daryl, Glenn, Maggie, and Sasha — and I assume that is Carol who is cropped out wearing the floral patterned shirt, and perhaps Carl in front of her? (Where’s Michonne?!?)

UPDATE – The Walking Dead official Twitter account has a wider (but not as tall) version of the photo as its profile banner, and in it you can see the rest of the people behind Rick, including Carol, Michonne, Carl, Tara, Rosita, Eugene, and Abraham. It also shows a wall and a church in the background, which complicates the symbolism a bit:

And there’s a slightly taller version from The Walking Dead Tumblr account, but it’s not as wide:

The members of #TeamChumps (Yeah, I’m #TeamRick all the way!) include Deanna, Jessie, Aaron, Spencer, and Wussy McBackstabber himself, Gabriel the Guilty.

As far as when The Walking Dead Season 6 will premiere, the show has historically lined its new seasons up with New York Comic Con, which would mean fans can expect to see the guys and gals smashin’ walker skulls again on Sunday, October 11. But that is purely speculation. Perhaps AMC will officially announce a date at San Diego Comic Con.