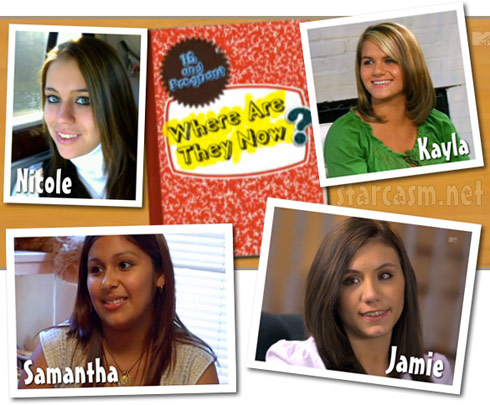 In anticipation of Sunday night’s Being Maci special and the August 26 premiere of Teen Mom 3, MTV is rolling out special webisodes that catch us up on what other 16 & Pregnant ladies have been up to since their episodes aired. The first four videos feature Jamie McKay, Kayla Jordan, Nicole Fokos and Samantha Hernandez.

“Within each video, these teen mothers talk candidly about teen pregnancy and contraception, touching on issues like what birth control methods they’re currently using and giving viewers a look inside at the difficulties that come with being a parent at such a young age,” a press release explained.

The first video reacquaints us with Jamie McKay who had baby Miah with her boyfriend Ryan during the third season of 16 & Pregnant. Since then, both Jamie and Ryan have gotten into trouble. Still, Jamie insists she’s learned from her experiences. She is now living in her own apartment, going to school full-time and getting by as a single mother.

We also get an update from Kayla Jordan, who had baby Rylan with her boyfriend-turned-fiance J.R. during season 2b. Kayla and J.R. were broken up by the time of the season-end Where Are They Now? episode and they haven’t gotten back together since then. In fact, Kayla is now in another serious relationship with a single father and is considering moving in with him.

The third webisode is with Nicole Fokos, who had baby Brooklynn with Tyler Keller during season 2. The Orlando 19-year-old has since broken up with Tyler and gave his grandmother written custody of her daughter.

“I felt like I was ready to be a parent when I was pregnant and when I gave birth to her,” she said. “But when me and Tyler broke up, like I said, I was free, so I didn’t have anybody to answer to anymore… I went out and partied.”

After going through that phase, Nicole was motivated to get clean by a friend and has been sober for more than one year. She now hopes to get custody of her daughter back.

The final webisode features Samantha Hernandez, who had baby Jordan with boyfriend Eric during season 2a. When we last saw the driven teen on 16 & Pregnant, she was going through a rough time with Eric. However, the couple has made it work and they are now living together with their 3-year-old daughter. She is also working full-time at the sheriff’s office and plans to go back to school once Eric finishes his education.

One theme that’s abundantly clear in these videos is that life isn’t easy for young mothers. The 16 & Pregnant girls we most often hear from are those who’ve gone on to earn salaries from MTV on Teen Mom. Although they also have struggles, they’ve undeniably benefited from MTV’s support. That’s not the case with most teenage pregnancies… And these videos are very real reminders of that.

MTV will also be updating fans on all the 16 & Pregnant Season 4 moms (excluding Teen Mom 3 cast members Katie Yeager, Briana DeJesus, Mackenzie Douthit and Alex Sekella) with a one-hour special reportedly airing Monday, August 19 at 10/9c. According to our blog pal The Ashley, “the footage was captured in June and July of this year,” which means the “Now” part of “Where Are They Now?” is a little more accurate than 16 & Pregnant and Teen Mom fans may be used to. 🙂