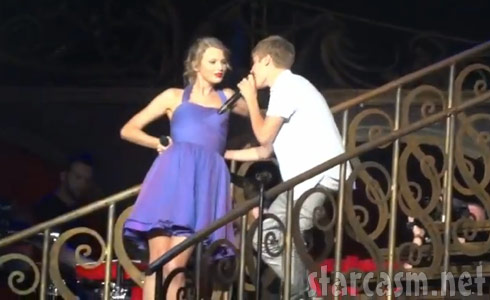 On the same day that the east coast was rattled by a 5.9 magnitude earthquake the ground was also shaking on the west coast as pop music superstars Justin Bieber and Taylor Swift collided on stage during her concert at the Staples Center in Los Angeles Tuesday!

Taylor introduced her surprise guest while standing on an elaborate stairwell stage prop and the two acted out a brief scene as the deafening shrieks began. The two then delivered a fun, choreographed performance of Justin Bieber’s career-launching single “Baby,” including a short rap break by the Biebs.

Here’s the full video followed by another, slightly shorter clip from another angle:

Taylor took to Twitter shortly after the show to express her thanks to Justin and amazement at the audience’s reaction. “Dear amazing LA crowd tonight, God only knows what I’d be without you,” she wrote. “You think you’ve heard LOUD screaming in your life. Then @justinbieber comes out and does a surprise song during your show. Woah. Unreal.”

Justin also expressed how much fun he had via Twitter after the show by tweeting, “@taylorswift13 we should do that more often. 🙂 great show! #muchlove.”

I’m beginning to think that Justin Bieber needs to either announce he’s Big Love Mormon or the heir to the Hugh Hefner Playboy empire so he can just go ahead and officially date every attractive young star on the planet. Heck, their could even be a drama-filled reality series titled The Bieber Wives. That would pretty much guarantee no young man in the country would be able to get a date because every single girl would be saving themselves for the chance to become one of the Bieber babes. 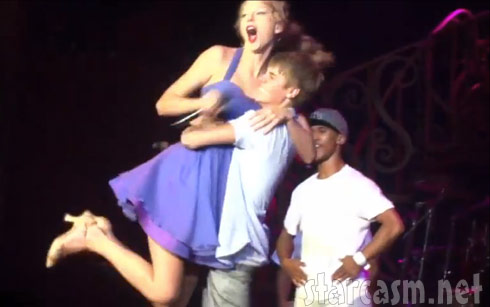 All kidding aside, Justin and Taylor looked great together, dontcha think? Ahhh who am I kidding – Justin looks great with Selena, he looks great with Kim Kardashian… He just looks great. Bleh. It’s all Usher’s fault y’all!