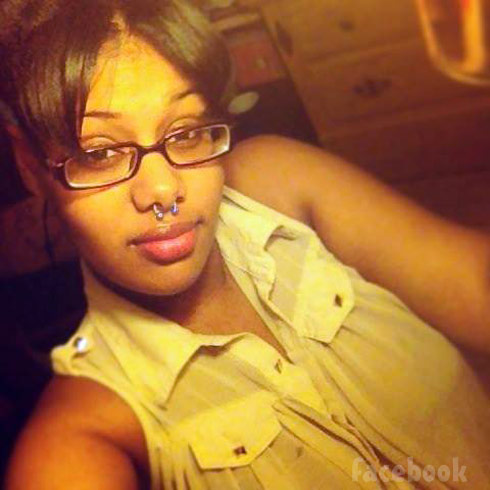 17-year-old Tiona Rodriguez (photo above) of Brooklyn, New York is currently at Bellevue Hospital after she and a friend were stopped for shoplifting at the Herald Square Victoria’s Secret yesterday and it was later discovered that in addition to stolen undergarments, Tiona was carrying a dead fetus in her bag.

According to reports, a store security guard spotted the two teens swiping lingerie and called police. “Officers responded to what seemed like a routine property crime,” says New York Daily News, “But as they corralled the two girls, store security guards noted a strong odor and made the gruesome find.”

Tiona, who was already the mother of another son, reportedly told the officers she suffered a miscarriage the day before after being pregnant for six-and-a-half months. “Another source” (it is unclear whom) says Tiona was actually “nearly full-term.” The girls allegedly confessed to detectives that they were shoplifting while trying to figure out what to do with the baby’s body.

On Wednesday night Tiona wrote “These Cramps SON -___________-” on her Facebook wall. She later shared a Vine video of people crying and screaming titled “Girls on their period” and Tiona wrote, “Me Right NOW :'(”

According to ABC 7, “The girls were arrested on charges of petit larceny and criminal possession of stolen property.” As mentioned previously, Tiona is still at Bellevue Hospital while her friend, also 17, is at the Midtown South Police Precinct.

ABC 7 reports the results from the autopsy that was conducted on the baby were “inconclusive pending further testing.” Obviously, detectives are trying to figure out if the baby was born alive, and if so, the girls will be facing far more serious charges.

Here are a couple of news reports on the story: