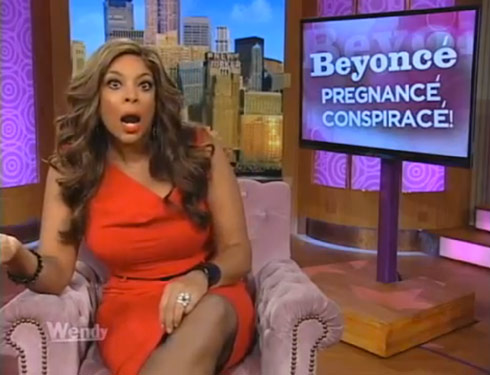 Baby Bumpgate has been in full swing since Monday afternoon when a video surfaced of pregnant singer Beyonce on the Australian talk show Sunday Night HD surfaced in which her rather large baby bump appeared to implode as she sat down for the interview. (CLICK HERE to watch the original video, see screen caps, and watch the animated gif of Beyonce’s cold busted moment and HERE for Beyonce’s reaction and announcement she is launching a line of maternity wear!)

I was bewildered when talk show host and gossip lover Wendy Williams completely passed on the scandalous story during the “Hot Topics” portion of her show on Tuesday, but my concerns of under-the-table payments from Beyonce to Wendy all but evaporated today when the wigged wonder took on Baby Bumpgate head on, going so far as to bring out two pregnant Wendy Williams Show staffers to see what happened to their bellies when they sat down!

Oh man, is there anyone better at having fun with a scandalous story and offering an opinion without ever clearly stating her opinion? Wendy seems to think the video evidence suggests Beyonce couldn’t be as far along as she suggests, if she’s pregnant at all – but she never actually comes out and says it. Wendy even describes the video clip by saying “when she sat down the baby bump squashed, bent, and crumpled.” You wouldn’t describe it like that if you didn’t think there was something suspicious going on!

Here are some more highlights from the Wendy Williams Show clip, including lots of great quotes from Wendy:

• “She’s either giving birth to a frisbee or Stewie from Family Guy.”

• After showing a recent photo of Beyonce in a bikini that supposedly proves she’s pregnant, Wendy stands up and strikes a similar pose declaring, “Then I’m pregnant too.” She goes on to joke, “Anybody who’s had a good smothered pork chop or a good burrito.. girls, c’mon! We all get this!” She concludes by stating quite seriously, “I’m not saying that she’s not pregnant there, all I’m saying is, honestly, that proves absolutely nothing to me.” 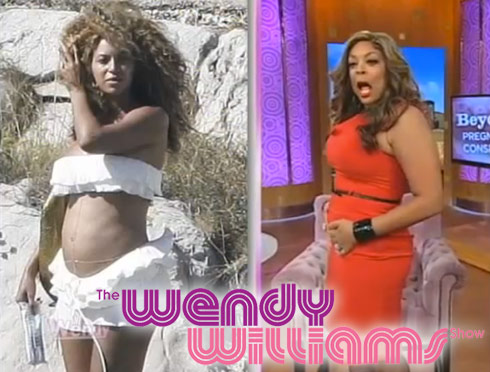 Wendy then lists a bunch of conspiracy theories about the alleged prosthetic baby bump:

1. “The baby is helping Beyonce’s sagging recording career. It is sagging, I mean the statistics show – but you forget all about that because you’re so focused on, ‘Oh, Beyonce’s pregnant!”

2. “Betyonce’s pregnancy is a way of keeping Jay Z’s alleged mistress away.”

3. “How about this one? The alleged woman over in allegedly Trinidad with the alleged ten-year-old alleged son allegedly by Jay Z – Beyonce’s trying to keep up with her! Allegedly.”

4. “And how ’bout this? This is the most disgusting one. Beyonce’s going to use a surrogate so she can maintain her body. I don’t believe that one.”

5. “Here’s one that’s even more disgusting than that. They’re adopting but they’re going to play it off like it’s allegedly, you know, like they gave birth.” Wendy then offers this prediction, “Now you remember that I was the firt one to say this … Watch, it’s going to be an at-home water birth in the master bathroom. There are going to be three people there: Beyonce, Jay Z, and her mother Miss Tina. Watch! There will be none of those nurses, there will not be any witnesses at the nurses’ station or anything like that. Beyonce, come on, you’re not like that are you? ***SIGH*** You know how some of these celebrities can be though – anything for attention. ANYTHING for attention.”

At that point Wendy brought out her pregnant staffers, one of which was a bit overzealous in her belly rubbing! (I’m just sayin’!)

So what do you think now? Did Wendy help convince you one way or the other? I still believe that Beyonce is definitely wearing a fake baby bump under her dress in that Sunday Night HD clip, but I don’t know if it’s because she wants to appear further along in her pregnancy than she actually is or if she’s not even pregnant at all.

UPDATE – Wendy Williams continued to talk about the Beyonce scandal in her after show! (She starts talking about it at around the 55 second mark)

Wendy says that she does think Beyonce is pregnant but that there have been “a lot of messy stupid celebrity shenanigans going on behind this pregnancy.” Wendy basically sums up her opinion on the matter by simply stating that she doesn’t want to be lied to and she hopes that Beyonce is in fact pregnant. Hmmmmm… Still sounds like she’s doubtful to me!