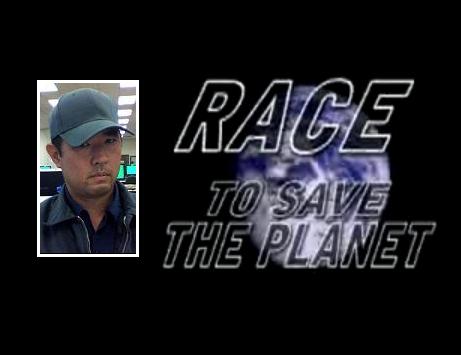 Following up on our previous post about James Lee, the man who is currently armed and holding hostages at Discovery Headquarters, we have now found a video that he produced that shows various violent and disturbing images of global destruction.

It is titled Race To Save the Planet and is supposed to be an introduction to a TV show that he has conceptualized.  Via his channel he wrote:

“Experimental video title introduction for a TV Show idea about saving the planet.”

James Lee video Race To Save the Planet:

The song accompanying the video is “Eve of Destruction” performed by Barry McGuire.

The video falls right in line thematically with the demands that he posted via his official website. These themes include the belief in an impending human caused destruction of the planet along with the idea that a TV show could help bring about the understanding of how bad all humans are for Earth. The images from that video along with the demands which you can check out here paint the picture of a troubled young man.

Here is the complete Race To Save the Planet concept from Lee’s web site savetheplanetprotest.com:

This is an idea for a reality-game show called “Race to Save the Planet.” This is a show where contestants would come from all over to compete with each other and come up with ideas to save the planet. The idea here is to use human inventiveness to save the planet from the environmental destruction it’s facing. People competing can either have completely new ideas on how to save the planet, or they can build on another person’s idea and make that original idea better.

Humans are proud and known for their inventiveness, they’ve invented millions of things that do work, so why not harness that energy to come up with creative ideas to save the planet? It certainly couldn’t hurt. The idea would not be limited to certain types of people, since good ideas have shown in the past to come from average people too.

The show starts with an introduction of a collection of video clips of environmental problems, pollution, endangered animals, smokestacks, violence, overpopulation, war, and desertification, with music playing in the background similar to the song “Eve of Destruction” as the scene ends with a clip of the earth with the title of the show “Race to Save the Planet.”

The host introduces himself and explains what the show is about: “This show is about the seeking of solutions using the creative inventiveness of the human species. Contestants may come up with original ideas or build on the ideas of others, improving on those. It is not limited to any specific type of solutions, but the best solutions will be decided by the audience.” And he then explains some of the current problems in the world and what we are doing that is causing them. He goes on to explain how the landscape is being paved over to make room for cities and human housing. He goes on to explain how farming is destroying the rainforests. He goes on to show the causes of Global Warming and the science behind it. He interviews scientists on the chemical nature of CO2 and the scientific explanation why that gas, which is normally heavier than air, is in the atmosphere above the lighter gases.

The question of the week is posed: “What do we do about Global Warming?”

Next, the scientists are introduced, an evolutionary biologist, an economist, and an ecologist. Briefly, they are introduced and it is explained that they are there as long as the audience wants them there and can be replaced if they are deemed incompetent or corrupt.

The contestants are then introduced and video clips of them are shown of their lives and their background. Since inventiveness is not limited to a certain class of people, no one is disqualified by their background.

The first contestant happens to be an amateur inventor who believes that everyone switching to electric vehicles is the solution. In a prerecorded taping, he asserts his vision and explains why it will work.

Contestant two is a hippie vegetarian who believes that the solution is to reduce the consumption of meat products which causes the release massive amounts of methane into the atmosphere, and instead eat more vegetables that get rid of the energy needed to process vegetable into meat products. He explains in his clip how that is scientifically possible.

Contestant three is a family planning advocate who insists that it’s entirely the population, and gives her solutions to decreasing the size of families by perhaps having community-tribal child-rearing as a solution rather than individual child upbringing. She explains her argument.

Now, each contestant is interrogated by the panel of scientists and their idea is argued over bluntly. First, the economist argues that electric vehicles are inefficient and impractical and hurt the economy because many gas-station businesses would go out of business and his idea takes into no account what would happen to those business owners.

Then, the ecologist hammers in saying that the production of fuel cells causes just as much environmental damage as gas-vehicles. He also asks what will be done with the gasoline vehicles that would have to be discarded and what damage that would cause on the environment. He also states the production numbers and the costs in water, fuel, and natural resources would be astronomical.

Finally, the evolutionary biologist comments that automobiles in themselves, contribute nothing to evolution in itself, since driving cars makes people fat, lazy, and mentally unfit. He makes a rude comment that if birds had airplanes, eventually they would lose their ability to fly. Not to mention that, but maybe ideas could be sought where people would just need to commute at lesser distances as a solution. He also states, that the production of more cars, whether it’s electric or gasoline, reflects the human population increasing to unsustainable levels.

Then the other constants gives their opinion on the first contestant’s solution. Then members of the audience are allowed to comment and argue. Finally, a vote is taken after all 3 contestants are debated in the same manner, only one is allowed on the show the following week and the other two are put on a list and profile to be decided on if they should return on a following show.

The winner is awarded a cash prize from the account and is also put in a database to be decided if that person should return the next week to build on the idea or to seek new ideas. New contestants are screened and the brightest ones who pass the screeners are put on the next show. Screenings will be done at the warehouse site where the taping of the contest will be done as well.

“Race to Save the Planet.” This show could very well save the planet.

The costs for this show will be about $26,500 per show and $23,000 for expenses to start it up. People will send in donations from all over the world in support of such a show in order to save the planet.