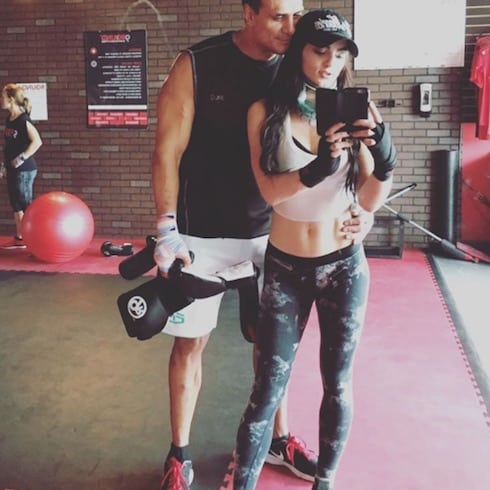 WWE fans were in shock after superstar Paige announced her relationship with her fellow pro wrestler Alberto Del Rio earlier this year. Their unlikely romance and 15-year age difference even surprised their fellow superstars and now fans are finally getting a chance to watch their whirlwind love affair play out on the upcoming episode of E!’s hit reality TV series, Total Divas.

Rumors of a romance sparking between Paige and Alberto Del Rio started swirling last spring and the couple seemed to confirm their relationship with a now-deleted Instagram photo taken while they were at Disney World, according to pro wrestling news site PWPIX. The couple has since gone public with their relationship, and Paige definitely seems smitten with her new man.

“I think he’s the special one,” Paige tells her friend, fellow pro wrestler Naomi in a clip from the upcoming episode of Total Divas.

When Paige ditches the Divas for a man, it's totes drama.

An all-new #TotalDivas is on WEDNESDAY 8|7c only on E! pic.twitter.com/1cZVomq2qc

But her new romance is causing drama between her and friends/co-workers because of how fast the relationship has developed. Paige’s pal and WWE on-air personality Renee Young decided to sit down and grab coffee with her to get the scoop on the new relationship, but the conversation quickly turns sour.

Sound the alarm ?. We’ve got another beautiful misunderstood Total Diva TOMORROW, 8|7c only on E! pic.twitter.com/nUSGUUhHaw

“People are worried about you,” Renee says, sitting across from Paige on a park bench.

“They don’t need to know sh**, I don’t want to talk about it,” Total Divas star Paige says, her temper flaring.

“I’m gonna walk away from this company and I’m probably gonna have maybe one friend out all this,” Paige tells Renee in another clip from the upcoming episode. “They just want to know my f**king business because they’re all gossip.”

Renee tries to interrupt but Paige cuts her off and gets up from the bench.

“And I don’t want to f**king talk about it, so I’m gonna go to work. I’m going to leave my f**king keys in the car and you can bring it because f**k this,” Paige tells Renee then throws her iced coffee cup on the ground as she storms off, leaving Renee with her mouth open in shock.

Watch both clips above and be sure to catch the next episode of Total Divas, airing Wednesdays at 8/7c on E!