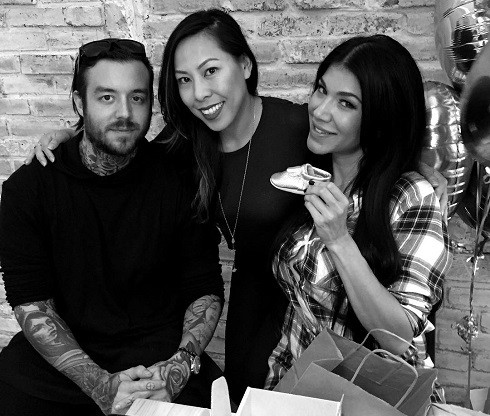 Wrestling fans may have noticed that Rosa Mendes has been noticeably absent from WWE Raw and WWE SmackDown. The Total Divas star has good reason to stay away from the ring–she’s pregnant with her first child! The 35-year old former model, reality star, and WWE Diva recently shared the good news in an interview with the WWE.

“I’m pregnant, and I’m having a little girl. Her name’s going to be Jordan Elizabeth Schubenski and she’ll be born February 2016. Mom’s middle name is Elizabeth, and I’ve always loved the name Jordan for a girl,” Rosa–real name Milena Roucka–said in her interview.

Finally the second trimester!!!! My 14th week. Energy is up, my appetite is insane, and NO MORE MOOD SWINGS!!! Everyone please congratulate @bobbyschubenski for surviving through my first trimester. I love you baby!!! Lol?❤️?

Though her pregnancy is keeping her out of the ring, it appears as though Rosa expects to step back into her role as a WWE Diva after the baby is born.

“I’ve been keeping myself very busy,” she said in the interview. “I’ve also teamed up with Rise Above Fitness, and I’m on a prenatal workout plan to keep me strong and healthy throughout my pregnancy and to get me back in shape after the baby’s born.”

Rosa took to Instagram to share a photo of her baby bump, along with the identity of the baby’s father.

The father of the baby, Bobby Schubenski, is Rosa’s boyfriend. Reportedly, the two started dating this past April. Bobby is a co-owner of the clothing line BlackCraft Cult, and is also a musician who has been a member of bands including Suffer Well, The With Was Right, and Monkeys Are MachineGuns.

I have a feeling she’s already a total diva! ❤️??? @wwerosamendes

After an assault by ex-boyfriend (and former WWE wrestler) Andy Slocum in 2012, and a 2014 stint in rehab that took her out of the spotlight, it’s great to see Rosa looking fit, healthy, and happy in her new role.

Rosa and the other WWE Divas can be seen on new episodes of Total Divas every Tuesday at 9/8c on E!

LHHNY When is Erica Mena’s due date? She and Safaree confirm pregnancy in surprise videos