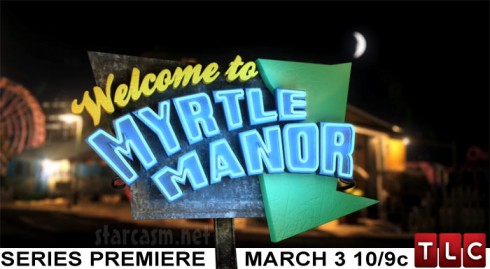 On March 3 TLC launches its latest reality show venture with the usual quirky twist, this time taking cameras to Myrtle Beach, South Carolina to follow the drama and antics of the residents of the Myrtle Manor trailer park. But don’t think for a second Myrtle Manor is your run-of-the-mill run-down collection of dilapidated portable abodes because park landlord Becky is making her dream of owning the best trailer park in the world a reality by transforming Myrtle Manor and all it’s vast array of quirky inhabitants into a 5-star resort!

We shared the official press release last week as well as brief bios of all the cast members and a few photos, but now TLC has given this super trailer park it’s first ever super trailer — a 3+ minute Welcome To Myrtle Manor intro narrated by Miss Jeana:

We’ve been cautiously optimistic about this series since we first heard about it waaaaaay back in December, but once we heard that The Weinstein Company had attached its name to the project we officially removed the word “cautious” from our optimism! We kind of imagined a Melrose Place meets Smalltown Security, and judging from the super trailer above, that’s exactly what’s in store — and then some!

I love the notion of a HUGE ensemble cast that looks to include each and every kind of popular reality show star, from the sexy babes (two of which sell wieners and just might be running a brothel out of their trailer!), to a hunky young dude from the local nightlife scene who looks fantastic exiting a swimming pool (oh, and by the way, has posed with Teen Mom 2 Jenelle Evans and lived to talk about it — always a plus!), to a gay Southern hairdresser with a flair for the hilarious (“It is my Christian duty to bring good hair to the trailer park.”), to an older party gal not afraid to let loose (as in her bikini top), to an all-too-serious security guard with a billion-dollar moustache, to a tattooed Wicca chick, to an ice cream loving bulldog, to an aI don’t know what dude who likes to blow leaves in an American flag and bald eagle vest with no shirt and blue jeans! 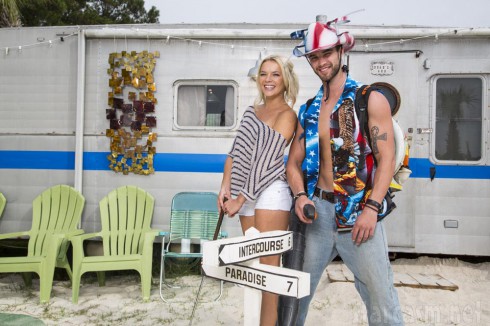 This is one of those situations where you just let the cameras role and put the load on the editors, because with that many characters living in a trailer park, there has to be an amazing reality show in there somewhere! Right?

I suppose we’ll find out when Welcome To Myrtle Manor premieres on TLC March 3 at 10/9c. Until then I thought I might revisit the memorable moment of solidarity from the super trailer that could easily sell a million t-shirts: 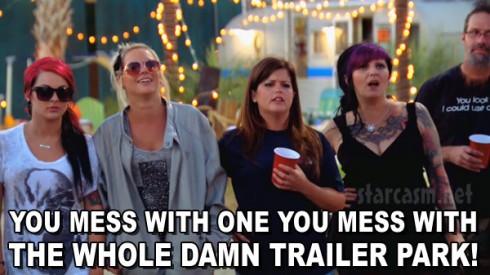 Oh, and just in case the super trailer didn’t have enough Go-Gos for you, here’s the 30-second commercial that has been airing on TV:

VIDEO Challenging Tom Cruise to a dance-off is risky business