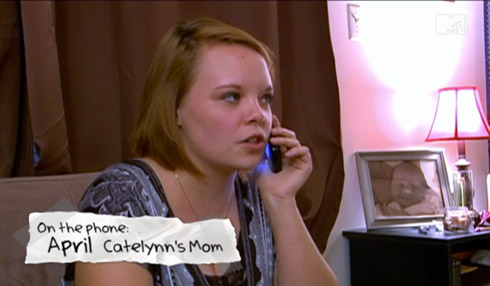 Tonight is a brand new episode of Teen Mom and for those of you chomping at the bit for your Teen Mom fix here’s a little preview clip thanks to MTV in which an emotional Catelynn Lowell talks on the phone with her mother April about possibly going to counseling to insure their relationship doesn’t disintegrate.

Whew! Catelynn’s point that she never knows what reaction to expect from her mom is validated in that conversation! April can be a bit angry and defensive at times, and I’m sure that makes it nearly impossible for Catelynn to talk with her about much of anything, especially if it in any way seems to point the finger at April.

That being said, I think April is making progress and her interaction with Catelynn is much improved over what we saw in the first season of Teen Mom. Though she may seem a bit reluctant in the conversation, April does seem willing to go to counseling and do some of the thing Catelynn wants her to do. So there seems to be reason to be optimistic here.

Do you agree? Can Catelynn and April ever work things out and develop a healthy mother/daughter relationship?