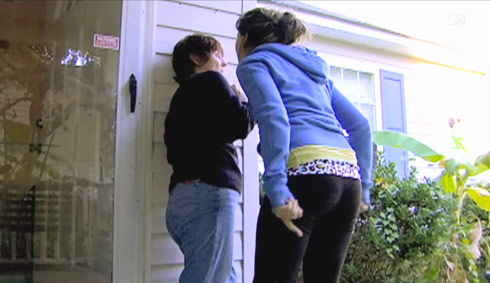 Can’t wait for tonight’s Season 2 premiere of Teen Mom 2?!? Then here’s a little preview clip from the episode to help tide you over featuring a rather heated spat between Jenelle Evans and her mom Barbara after Jenelle gets dropped off by supposedly former boyfriend Kieffer Delp:Wow. It’s easy to forget in all the excitement building up to tonight’s premiere that these girls’ stories are sometimes brutal. Jenelle and Barbara have had some heated exchanges in the past, but nothing like that! That is some profanity laden vitriol right there! And poor Jace didn’t know what was going on.

It’s clear Barbara has a very short fuse when it comes to Kieffer, who she refers to in the clip as Jenelle’s “scummy a$$ boyfriend” among other things.

Jenelle initially appears to be taking the relative high road, but Barbara’s continued aggression and mocking, including the comment, “I hope you have fun living in the f***ing street with your booooyyyyfriend,” eventually elicits a response from Jenelle, who not only physically shoves back but also does so verbally, telling her mom “You’re no better than me!”

Then, after Barbara tells Jenelle to never come back and to “go live with your lowlife [inaubible] boyfriend,” Jenelle says (while sitting on the curb with a basket of her clothes), “Why can’t you just leave somebody alone? I mean, seriously. That’s why you never got anywhere in life, don’t you realize that?”

To which Barbara responded as she went back inside, “You’re too selfish to f***ing take care of your own kid, you little b!tch!”

And Barbara isn’t the only one Jenelle gets into a heated argument with this season, as evidenced by this brief preview clip for Season 2 featuring Jenelle and boyfriend Kieffer Delp getting into a physical altercation:


(CLICK HERE to see similar brief commercials for Leah, Chelsea, and Kailyn as well as one just for the babies!)

Something we need to remember is that this was more than a year ago (At the very beginning of the clip Jenelle says she is there to take Jace trick or treating, so this is from Halloween 2010). It appears that things have gotten at least marginally better between Jenelle and Barbara since. Also, Jenelle and Kieffer are not together any more, due in some part to the fact that Kieffer is currently behind bars. MTV needs to step up their game and keep this stuff more current yo!