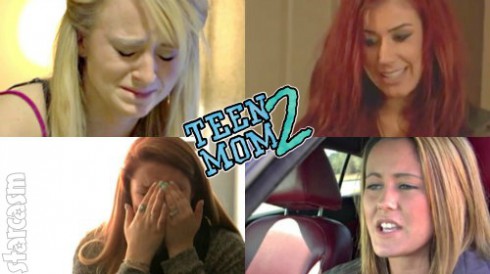 Here’s more about what to expect from MTV…

Shortly after getting engaged, Jenelle Evans and Nathan hit their biggest bump yet when Nathan was arrested in March “after a series of volatile fights.” As the preview shows, Nathan pled with Jenelle while being loaded into the police car by claiming he didn’t do anything. (Spoiler: The charge against him was later dropped. Another spoiler: Now Jenelle is in trouble for criminal domestic violence.) Jenelle’s never-ending issues with mom Barbara Evans also continue this season, with her vowing to keep Jace from ever seeing his grandma again if and when she regains custody.

Life doesn’t seem to be going much smoother for Kailyn and Javi, who are on the verge of divorce because of jealousy issues and regular feuds. Complicating matters further, Kailyn’s ex, Jo Rivera, and his pregnant girlfriend, Vee Torres, moved to Delaware to be closer to Isaac.

As for Leah Calvert and Jeremy Calvert, MTV confirmed what we all thought: He filed for divorce. The preview seems show Leah in another drugged up state before Jeremy told her, “The girl I fell in love with ain’t the girl I got now.”

Leah’s struggles with (first) ex-husband Corey Simms also continue as he tried to gain full custody of their twin daughters and asked for a court-ordered drug test.

Everything seems to be going best for Chelsea Houska, who appears to be in one of the cutest relationships ever with Cole DeBoer. (Check out the Dirty Dancing reenactment around the 38-second mark for proof.) However, she was forced to deal with ex Adam Lind again when he filed for joint custody of their daughter.

Watch how it all unfolds when Teen Mom 2 premieres on Thursday, July 9 at 10/9c.