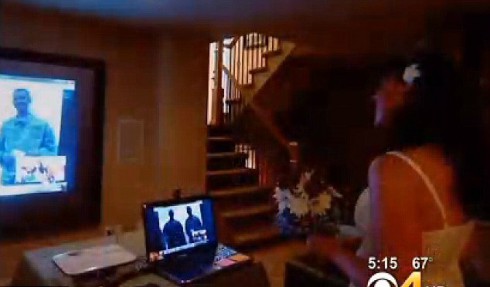 In the case of Darrin and Tory Bursts’ wedding, all they needed was love… And a little technology. Just before his deployment to Afghanistan, Panama-based Darrin and Colorado-based Tory tied the knot via a Skype chat.

“He is getting deployed to Afghanistan shortly, so we wanted to make it official before he leaves for that,” said Tory in an interview with CBS Denver.

Although a ceremony in which the groom cannot kiss the bride is far from ideal, the newlyweds didn’t have another option: Darrin, who is a staff sergeant in the United States Army, proposed to his longtime girlfriend at the airport before departing for Panama. As Darrin won’t have access to Skype while in Afghanistan, they had to put a speed-order on the ceremony.

“I had less than a week to organize it,” Tory said. “It was a little chaotic.”

Still, the bride was able to pull everything together for a small, family-attended event.

Meanwhile, some 3,500+ miles away, Darrin’s fellow soldiers helped him plan.

“They had him walk under the machetes,” Tory said. “They had a guy playing violin, which was really nice.”

After the ceremony, which was officiated by Darrin’s commander, the bride and groom each had some cake. Still, the sweetest moment will likely come when the two are reunited in a few months.