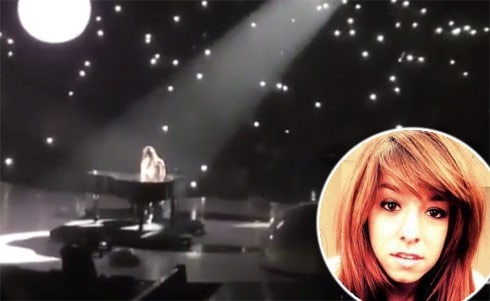 Gomez told her fans while seated at the piano for the beginning of a cover of Hilltop Worship’s “Transfiguration” which lead into her own “Nobody”:

“When she was 14, we met her and my parents and I signed her. One thing about Christina and her family is that she holds her faith so closely to her. And I think it’s not about a religion and it’s not about anything or good deeds. It’s just that she had faith, and I don’t really understand how this really happened, but I would like to dedicate this next song to her.”

Grimmie was shot to death Friday night after her performance at the Plaza Live in Orlando. A lone gunman killed her while she was greeting and interacting with fans. The murderer took his own life after Grimmie’s brother, Mark, tackled him.

This morning Americans woke to the tragic news that the deadliest mass shooting in U.S. history happened the following night in Orlando, where another lone gunman opened fire at Pulse Nightclub. As of this report, 50 people lost their lives with over 50 others injured.