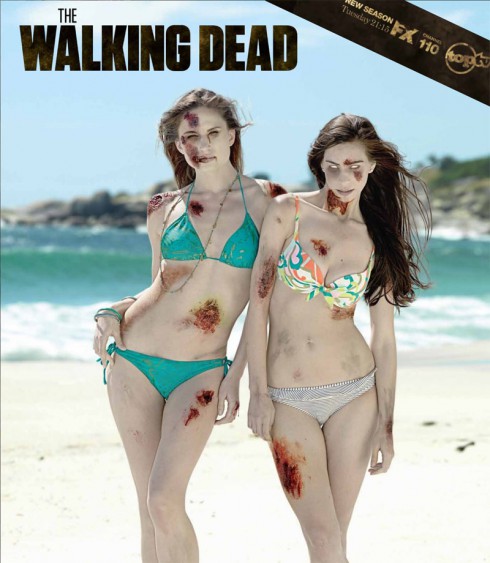 I have to confess that I am a HUGE fan of The Walking Dead, and I also confess to having crushes on a number of the female cast members. BUT, my attraction usually ends once they die. (I won’t openly grieve to prevent spoilers for those who aren’t caught up.) Apparently the same can’t be said for all fans of the show because there is now an official The Walking Dead zombie bikini calendar!

Created by Ireland / Davenport, the calendar features numerous, ummmm, “drop dead” gorgeous bikini clad bodies with what appear to be bad bed sores and Photoshopped opaque contact lenses. And how do I know they are Photoshopped contact lenses? Because their eyes are perfectly normal in the video. What’s that? Yep, there’s a video:

From the video description by Ireland / Davenport: “To launch The Walking Dead Season 3 we shot a swimsuit calendar, with a difference. We got some models in their bikinis and then made them up to look like zombies. The zombies are back.”

In all fairness to AMC it appears as though this project is for the South African market, as evidenced by the premiere date of December 15 in the corner as well as “Channel 110” and a toptv logo. Even so, I would think that in order to carry the prestigious Walking Dead brand it would have to be at least a little bit better than this! For example, check out this zombie calendar from 2010 in which there was obviously a bit more effort — and fun — put into it. (Either way, I’m still not a zombieauty fan. My calendar girls can be infected, but I like ’em alive and able to whisper sweet nothins!) 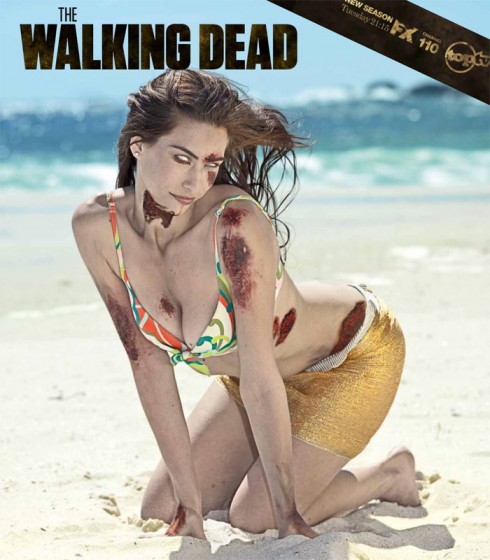 In case this sampling of festering femme fatales wasn’t enough to satiate your morbid curiosity, you can hop over to dev.ireland-davenport.co.za and download the entire calendar for free!

On a side note, is everyone else digging this new season as much as me? Season 3 is kicking Season 2’s ass! I swear last season I sometimes felt like I was watching a farm-based reality show that just so happened to have a very occasional zombie. I’m guessing in the larger story arc Season 2 was intended to be our chance to really get to know the characters through almost normal human interactions, but forget that! This is The Walking Dead! Give me zombies, amputations, Governors, and Samurai swords!

Starcasm overhaul in progress, no new posts for 48 hours :(