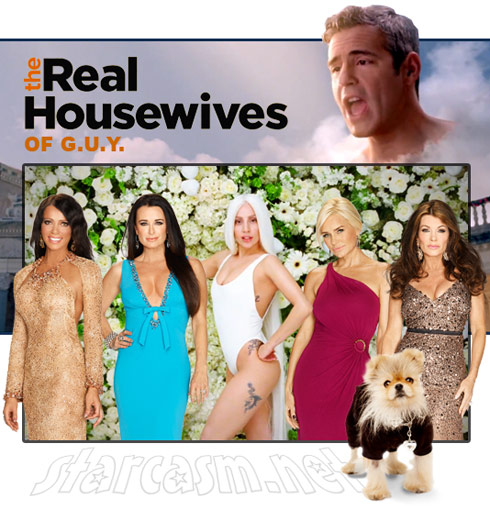 Lady Gaga premiered her epic new music video for her ARTPOP single “G.U.Y.” (Girl Under You) last night and the 7+ minute mini-movie starred some familiar faces to Starcasm readers as most of the ladies of The Real Housewives of Beverly Hills made the transition from Bravolebrities to Lady Gagavolebrities — including Giggy and Andy Cohen!

Here’s the full video. (Don’t be too intimidated by the 11 minutes, 46 seconds because the video actually ends around the 7:40 mark and after that it’s just credits.)

The ladies make their first appearance as members of some sort of pink-clad angelic musical supergroup with Kyle Richards and sister Kim Richards on acoustic guitar, Yolanda Hadid on cello, Carlton Gebbia on harp and Lisa Vanderpump singing and playing the tambourine:

In addition to The Real House Musicians of G.U.Y., Gaga also brought in the head of Housewivesery (literally) as Himeros, the Greek god of sexual desire and son of Aphrodite! (Although the lengthy end credits list Andy as Zuess, Gaga clearly introduces him as Himeros in the video intro.)

Giggy makes his appearance later in the video as one of Lady Gaga’s “Accomplices” alongside Lisa Vanderpump and Kyle Richards: 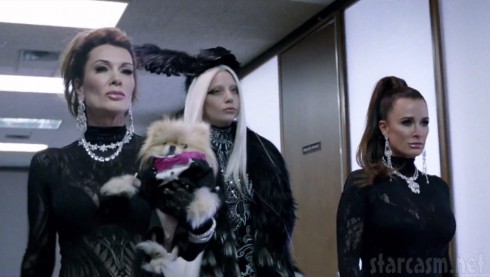 So why wasn’t Brandi Glanville in Lady Gaga’s “G.U.Y.” music video? Andy Cohen posted a video of himself watching the video from the WWHL clubhouse and in the intro he says incredulously, “I’m in it!”” He then adds, “And the Beverly Hills Housewives are all in it as well, minus Brandi, who was traveling when we shot it.”

Here’s the clip of Andy Cohen watching the video for the first time followed by the reactions from the Real Housewives after the video release:

“@ladygaga: @Andy we love you so much! thank you for making this with us!” I WANNA BE YOUR G.U.Y. Xo Zeus

Good morning yes it's true @ladygaga What an honor,I bow down to the queen and it was a pink moment..thank you.

This may be the most fun thing I've ever done @ladygaga #artpop #G.U.Y http://t.co/4zkEPIShxj

Even Madame Gaga bows to my greatness as the original sex monster.

I felt kinda bad… http://t.co/oYD9UtrKej But it was for art..sad tho …oh well.

* Strangely, at the time of this post, there has been no Twitter reaction from Kim, Yolanda or Carlton.